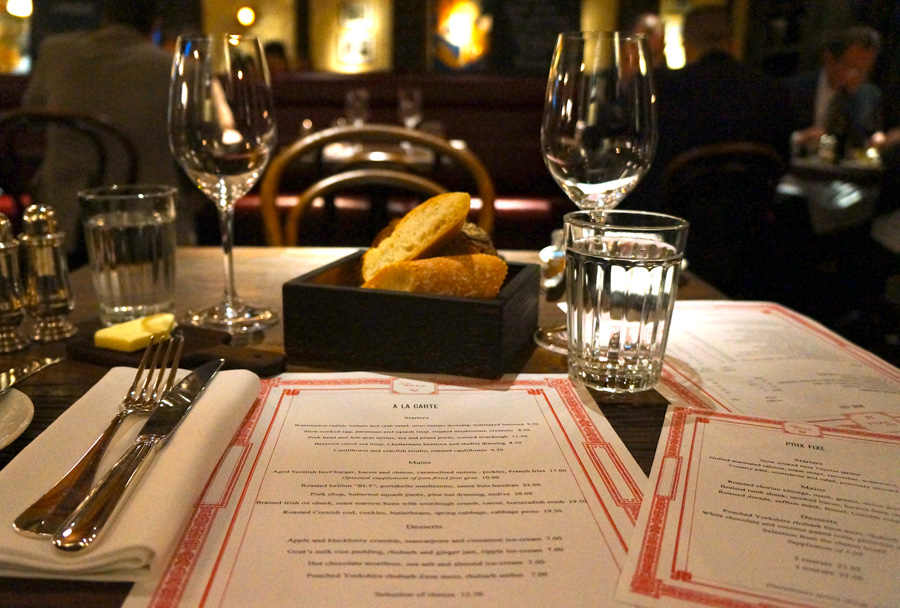 Another week in March, another new restaurant. I confess, this one rather crept up on me. I suspect that was mostly because my attention’s been elsewhere, even occasionally on non-food related things (would you believe?). But frankly, whether it was me not looking, or a deliberately low key effort until the very last minute on their part, or both, not knowing felt healthy; even the publicity and hype about pre-opening restaurant publicity and hype is becoming tiring.

I only really became aware of it because my lunch partner had been far more keyed in to newest thing than I, and I was glad to tag on to her reservation when invited. At least once I’d Googled what this ‘Little Social’ place was: a restaurant by Jason Atherton, loosely based on a French bistro, apparently unusually relaxed and reasonably priced for its Mayfair address.

To be honest, after I heard they phoned two days in advance to confirm the booking, and that there might be a one hour turn on the tables, I went prepared to gather material for a hatchet job, with ‘A Little Unsociable’ already in the back pocket as my three word tag line. But it wasn’t to be, because it is, quite simply, a little bit good. Not the world’s best restaurant, not era defining, game changing or ground breaking. Thank God. Just competent, slick, quietly confident. A modern and unfussy take on classic, tasty, French bistro food.

Little Social sits across the road from Pollen Street Social, the epicentre of Atherton’s burgeoning restaurant kingdom. The frontage is understated, with just a menu box to indicate you’re in the right place. Inside is long and thin. Arguably, the two best tables are at either end, one in the bay window at the front, the other more secluded but still exposed to the room. In between is a bar and various plump ruby leather banquettes and pews, dark wooden tables and similarly varnished classic bentwood chairs. Where not mirrored, the walls are decorated with posters typical of most French bistros (whether authentic or mock), though they’re set in frames and against wallpaper of a value atypical to the genre. Nothing wrong with that – it’s stylish, comfortable, slick, even.

We both settled for the prix fixe menu – two courses for £21, three for £25. On yet another austerity Budget day, that felt appropriate. A few other wallet friendly options exist – bavette steak and frites for £15 – but by and large it’s at the top end of ‘bistro’ prices. Basically £10 for a starter, £20 for a main, £7 dessert. On a different occasion (or on a business credit card, as will be used by many), I would have ordered the slow cooked egg, parmesan and squash soup with wild mushrooms; the braised ox cheek with roasted bone marrow, carrot and horseradish mash (the next door table had this and it looked superb); and the hot chocolate moelleux, sea salt and almond ice cream. Then I would have gone back to my desk and slept.

The prix fixe options were good, though. Grilled, marinated salmon with sugar snaps, radish and sorrel was the lightest starter. I liked that the chunks of fish had only been quickly, if fiercely, grilled, so most of the chunks were blushing pink and raw inside. My slow cooked tuna Niçoise tartine was intriguingly named and, in the end, turned out to be well presented slices of soft, tender tuna, much of it raw in appearance (was the slow cooking the result being sat outside the fridge?), topped with plenty of sweet and salty anchovies, and the other typical Niçoise bits and pieces (egg, tomato, green beans, olives). It all sat on a slice of grilled sourdough and was a smart take on the old salad. A very garlicky pesto dressing might be a problem for some.

Mains were hearty. Chorizo sausages with cabbage, mash and onion gravy went down well. Better still was braised lamb shank, nice and firm haricot beans, a splodge of sweet roast onion puree and excellent lamb ‘jus’ poured in unnecessarily dramatic fashion from a silver jug at the table. The lamb was full of flavour, tender and well seasoned. These were simple dishes involving frugal ingredients, and I can picture a few of your eyebrows being raised, but they were cooked and plated with skill, and were evidence of a kitchen with high standards.

Dessert was perhaps a bit of a let down. We both had the poached rhubarb ‘Eton mess’: a tumbler containing a couple of quenelles of rhubarb sorbet and a plainer ice cream, mixed with meringue crumbs and bright pink poached forced rhubarb. The concept was fine and the rhubarb good, but I felt the meringue crumbs were oversweet and overpowering. I kind of knew before ordering that I should have paid a supplement for the chocolate moelleux from the à la carte.

Overall, though, I was impressed and will go back to take on the main menu; ideally before the season finally changes and the ox cheek and bone marrow is replaced by something light and fluffy.

There are restaurants in some neighbourhoods with more soul. Of course such places exist across London and around the UK, though the best examples, I think, are in provincial France. If soulful and unassuming is what you yearn for, seek them out / stick to your favourite (I commend to you my old local, La Belle Epoque, should you ever be in Toulouse). But such restaurants don’t, nor do they pretend to exist, fifteen metres from the Golf Sale shop just off Regent Street. Little Social, however, is a very well put together restaurant and already a slick and quality operation. It will work perfectly for the kind of business lunches where you are genuinely catching up, rather than exchanging awkward pleasantries. And it will be spot on for friends wanting to eat out centrally, perhaps for a bit of a celebration, but without totally demolishing the bank. The standard of the food is at a good level, the flavours are strong, clean and well balanced, the room feels expensive and stylish, the service is slick, and the atmosphere (get ready for the groan), is sociable enough.