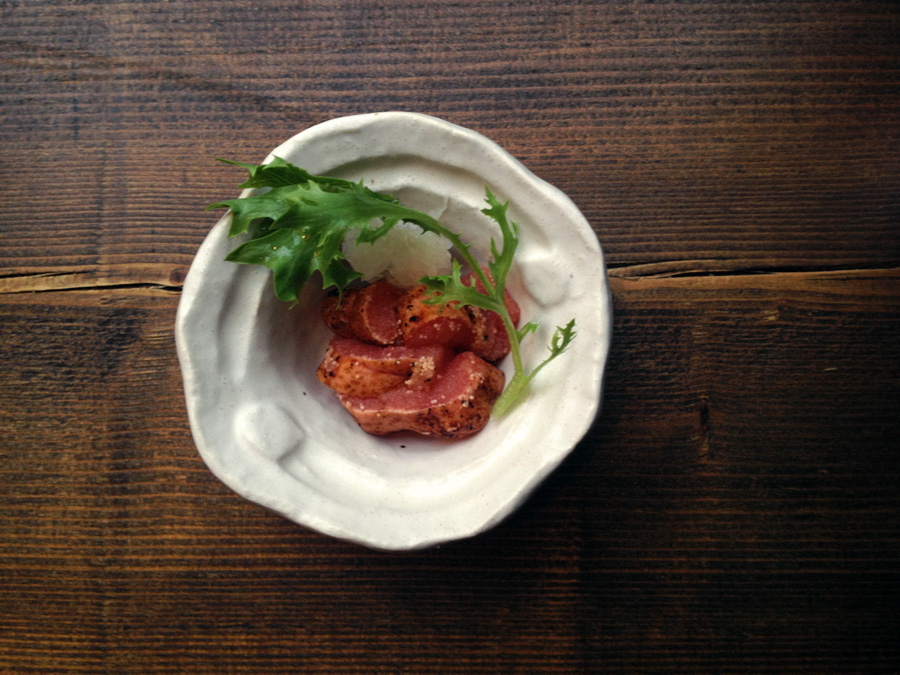 Try and frown as wafer thin bonito flakes dance in the heat of the takoyaki balls that they flutter over. I’m not sure it’s possible.

Consider when you were last offered, alongside 50 other tempting options, seared spicy cod roe, crispy deep fried prawn tartare with shichimi curry sauce, or a grilled rice ball with green chilli miso sauce. No, not recently?

Despair at how the place is run …

Kirazu is a small Japanese restaurant on Rupert Street in Soho. It’s been around for about six months now. I know this because I’ve stared in the window at the attractive room numerous occasions, wishing it was open for lunch during the week and wondering why it’s not packed in the evenings. Their offering is described as “Japanese tapas” – a horrible and sadly common fusion of terms, but what other way to describe small plates of Japanese dishes when trying to avoid being pigeon holed as a sushi bar?

There are, as mentioned, a large number of those small dishes to choose from: a couple of bowls of ramen; cold salads such as tofu salad with blue perilla (a mint-like herb) dressing; sushi and sashimi; cold tapas including sauteed lotus roots with sweet and spicy sauce, conger eel and cucumber with Japanese vinaigrette; a wide selection of (largely deep fried) hot tapas covering all vegetable, fish and meat bases; mini rice based dishes; and two specials boards repeating all those themes and almost doubling what’s on offer. Most of those dishes are priced £3.50 or £4.50, with a few of the more basic things £2.50 and some sashimi around £7. They are all small and few divide adequately by more than two. But by and large they seem fairly priced, considering the cuisine, quality, novelty and location. You do need to order a lot to be sated, though.

The takoyaki and seared cod roe dishes were particularly enjoyable. Takoyaki is (are?) a Japanese street dish, made using half sphere indented hot plates, a wheat batter and octopus scraps. The result is a soft, faintly salty ball with a crisp outer skin. Kirazu’s were light and well seasoned, featured a chunk of tender, pink tentacle in the centre of each ball, and were topped with just a drizzle of a sweet and sour sauce (on the street they’re often smothered and sickly) and those dancing bonito flakes. A real joy. Seared spiced cod roe, served at room temperature, was new to me but something I’ll definitely have again. A wonderful contrast of textures (a membrane with a bit of bite, releasing soft, silken, tiny roes balls), well spiced to bring tingle, but not overtake the salty tarama taste.

Deep fried prawn tartare was not, as I’d faintly hoped, an ethereal scattering of (implausibly) still cold, delicately cubed sweet shrimp, coated in the lightest crunch of hot and crisp tempura batter. No. Think, instead, of dense, minced prawn nuggets. Oh well, the nuggets were still delicious and little dots of shichimi sauce set them off even better than any sachet of sweetened curry sauce ever did a 6 pack from the Golden Arches.

A wedge of grilled rice, sheathed in nori and topped with green chilli miso, was good and there were no complaints about baby squid and razor clam sashimi. In fact, everything was very decent. Not at the level of the best specials board items at Koya, and certainly not sensational like Tetsu. But never less than pleasant and generally much better and more interesting than that. I’d only swap a spicy pork shabu shabu salad for another item.

So why the despair?

For a host of reasons, it’s not as easy as it should be to eat at Kirazu.

Unusually for the area, they take bookings. Not that it’s obvious – in the eighty minutes I was there, eight separate attempts to get a table were made from people who specifically stated that they’d not been able to get through by phone (only after 5pm, I found), or had looked at the website, been confused and decided you can’t book. Those people were turned away, despite only a maximum of ten of the thirty seats being occupied at any one time. Presumably because the seats were being saved for reservations. Yet I saw only six further bookings listed on a post-it after my 6:30pm slot.

In fairness the empty spaces were, in part, deliberate. I suspect one motivation for turning customers away is down to the limitations of the kitchen: one chef; one tiny prep area; no obvious hot points (save a fryer, rice machine and microwave). Having fifty odd options on the menu equals a heck of a lot of fiddly prep for one person and may explain why they can’t physically do that for a totally packed dinner service, let alone a lunch service too. But, sheesh, employ one other cook and smash it out. Surely a Soho postcode required bums on seats and tables turned throughout the day to survive?

With no meanness intended (I like this place and wanted to love it), funds for that extra chef might be found by swapping out one of the wait staff. All lovely; occasionally redundant (those empty seats don’t need much attention); but mostly hiding behind the counter, slightly shy about serving, and unable to address customers because of language barriers. It was pretty hard to order, ask for recommendations or any information at all. I understand there’s an omakase (chef’s choice) option, but I’m afraid I couldn’t speak about nor order it. Charmingly naive and ineffective works in lots of places, but Rupert Street?

There’s huge potential at Kirazu. The chef does a lot in a tiny space equipped with almost nothing. There are dishes on the menu that I haven’t seen elsewhere in London and many of them are done well. But instead of predicting continued invention and improvement (again, see Koya), it’s hard to imagine the chef can continue to be creative when acting as a one man mass canapé maker. This isn’t me being a spoilt, pity-me-cos-service-wasn’t-perfect diner. I despair most that Kirazu don’t fill the seats they have, when they surely could. Give it a go, if you can.

Two people could order 6-7 different dishes each, experience a decent sample of the menu, and get out for around £30 per person. A good selection of shochu, sake and Japanese beers will nudge the bill higher. 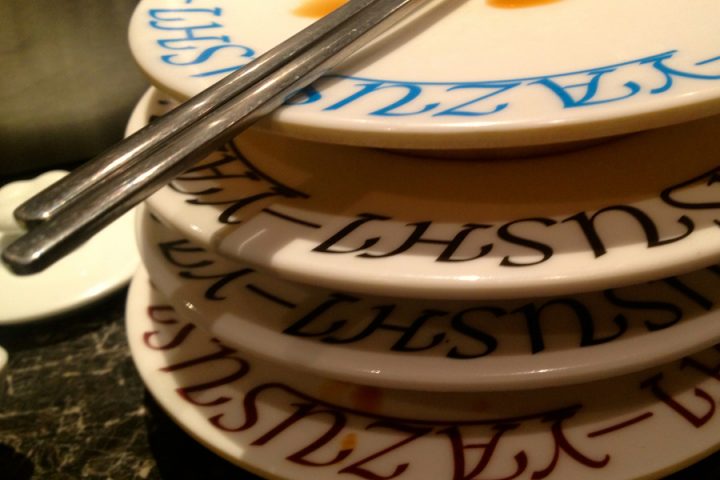