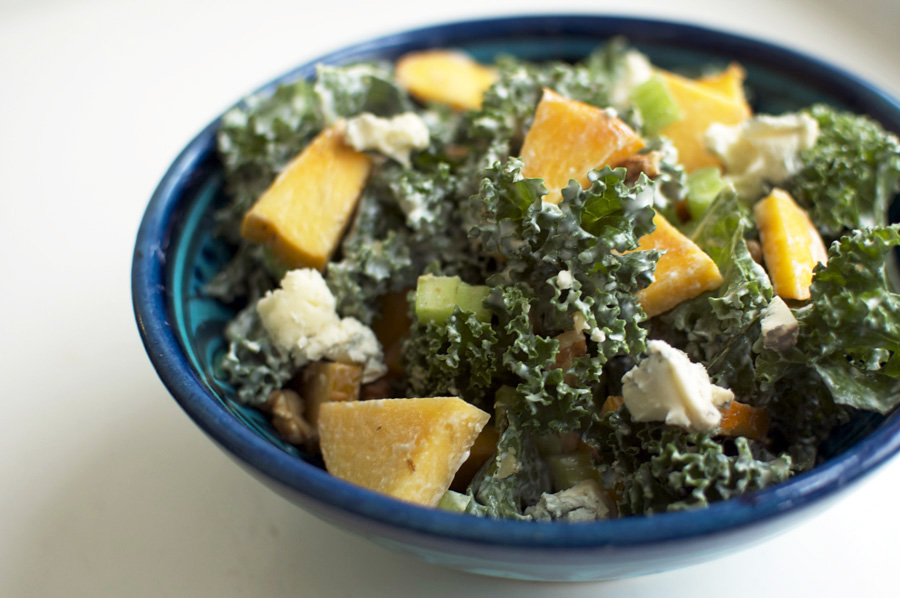 Following on from a riveting post last week, here’s the second in my exciting new series of persimmon recipes (I know, I know, I’ve kept you waiting too long – have you coped OK?).*

So fuyu and the Spanish kaki persimmon basically eat like an apple or pear. The skin is relatively soft, the flesh firm and sweet. That said, though it’d be fine to hold a fuyu in your hand and gnash straight in, for some reason it feels more natural to cut it into chunks or slices.

Like a pear, the sweetness of persimmon balances salty cheese well. Hence the goat cheese in last week’s recipe, and the reason for thinking about matching it with blue cheese this week. I used dolcelatte – because I wanted a strong, slightly sweet but not overbearing soft blue (Saint Agur would work too, but roquefort would kill it). It’s only a short step from thinking “this is a bit like pear and blue cheese” to including walnuts and celery in the mix too. So I did, and it was good.

Why the kale? Well, kale is all around us at the moment and as far as I’m concerned long may that continue. It is good raw and so gives us a new salad leaf option; though you should tear or chop it into relatively small pieces and ‘massage’ and let it sit in citrus juice for a bit to make it great. Kale holds a significant advantage over normal salad greens in that you can dress it well in advance (this salad was perfectly decent 24 hours after it was originally assembled).

* I say “series”, but it’s just the two posts for now. Maybe there’ll be some more … much later.

Serves two on its own. But best as a side dish for 4.

First prepare the kale. If loose and chopped already, just give it a wash, drain and pat dry. If on stalks, rip off from the stalks into pieces about 2.5cm2. Wash and dry it.

Put the dry kale in a mixing bowl, pour the lemon juice over and rub into the leaves, ensuring there’s a good gloss over all the pieces. Cover and leave in the fridge for an hour or so.

Put 45g of the cheese in another bowl – a small pudding bowl is fine. Mash with a fork or wooden spoon and beat until smooth. Add the yoghurt and mix together well. Then add the oil and, again, mix well. Split the celery stick in half lengthways then chop width ways into 2mm crescents. Crumble the walnuts. Slice the persimmon into quarters or sixths lengthways, then across those lengths about 3-4mm wide.

Chuck the dressing in the kale. Give it a good toss. Add the celery, walnuts and persimmon and small cubes of the remaining cheese and give it one last mix up. 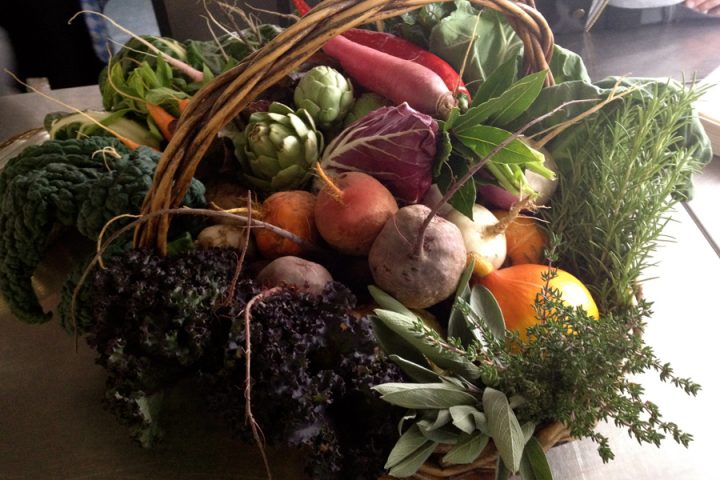