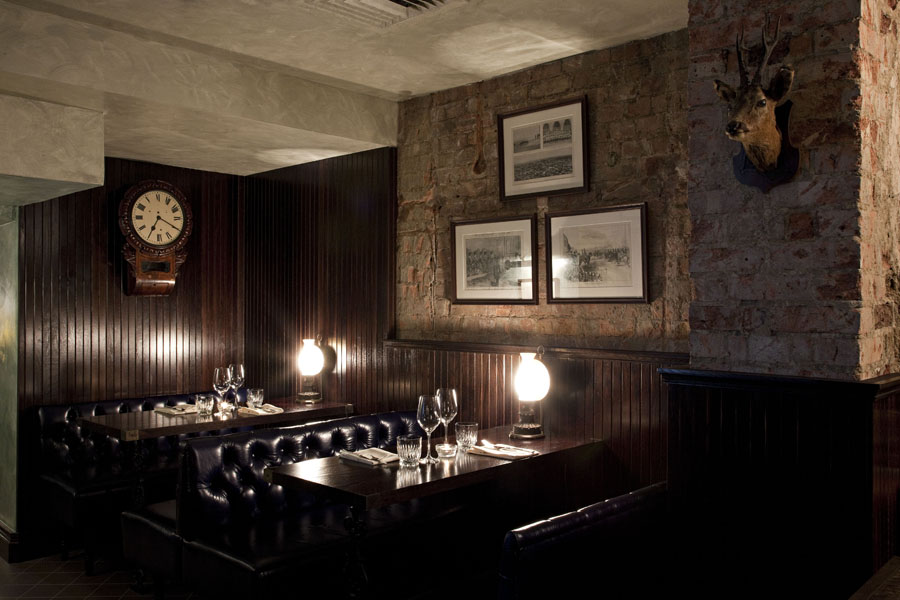 Imagine a waiter taking it upon himself to crack the perfect, wafer thin caramel on top of your crème brûlée. You wouldn’t stand for it, would you?

So you’ll understand why, when our extremely charming and very competent waiter tried to break into the beautiful, bronzed, nigella seed dotted pastry crust of my wild muntjac biryani, I grabbed the spoon and beat him to death with it.*

A gentle tap was all that was required to shatter the dome. This action revealed steaming, moist, perfumed rice, jeweled with rich, tender venison in a sweet spiced marinade. All of which were set-off by the cooling pomegranate and mint raita placed at the table by our lovely server, just moments before he tragically died.

It was the best biryani I’ve had in a restaurant and I’d do the same again in a heartbeat, your Honour.

The scene of the crime? A new Indian (or Anglo-Indian) restaurant on Albemarle Street in Mayfair, opened by the team behind the excellent Trishna in Marylebone.

Gymkhana is inspired by the exclusive sports-social clubs set up during the Raj. I’d hazard a guess that it borrows and betters, rather than replicates. There are sepia team photos, hunting paraphernalia and Punch cartoons on the walls and a smart clubby feel to the place. Marble tops, brass fittings, dark wood and swanky leather abound. Picture a comfortable and classy blend of old school memorabilia and timeless style; a similar quality and attention to detail in design and execution to the recent crop of Jason Atherton restaurants.

A stiff drink is required to help you decide what to order. So it’s handy there’s a strong (in all senses of the word) cocktail list. The ginger flavoured ‘quinine sour’, drunk with a curry leaf poised just below the nose, was crisp, refreshing and perfectly balanced and certainly helped the process.

Even then, it was still a struggle to plan our way through the massive and almost universally tempting menu – with Fear Of Missing Out being the dominant emotion. We had to pass on Chetinaad duck, dosa and coconut chutney; butter, pepper, garlic crab; duck egg Bhurji, lobster, Malabar paratha; Gilafi quail seekh kebab; partridge pepper fry … and at least 20 others. A 7 course taster menu (£55) and a 5 course game menu (£65) might have taken some of the pain away, if not that FOMO.

What we did have, though, was super good; all of it interesting and well cooked. There’s depth in the spicing, but the flavour of the meat, fish or vegetable still stands out – important when that’s a partridge breast, wild tiger prawn, wild deer, or kid goat brain.

One of the standout dishes was a bowl of minced kid goat methi keema, served with a bread bun (pao). Soft, yielding, rich brain dotted in the dish like bone marrow is an optional extra. A decadent (and meaty) version of the streetfood pao bhaji, this dish was utterly gorgeous, though I would have enjoyed a Mumbai portion of butter on the bread too. Crunchy potato chat, chickpeas, tamarind chutney and sev was also successfully taken from the street and dressed to fit smart porcelain. To complete a sort-of-starter round we had moreish mussels in a thick Keralan coconut sauce, which was matched and enhanced by a sweet garlic naan.

With the help of our excellent attendant (RIP), we manufactured a fish course from the tandoori section of the menu. Wild tiger prawns were just blackened by the oven, but still tender, soft and flavoursome. Bream fillet was lacquered by a beautiful green chilli and coriander marinade. Looking back, I realise both of these (or similar dishes) are on the Trishna menu and I’d had them before. It was no loss, but we could have stayed on a more game and four-legged theme.

Which brings us to the meat mains and biryanigate. It had been hard not to choose tandoori grouse breast (normally guinea fowl) and suckling pig cheek vindaloo, but that muntjac biryani and a plate of lamb chops and slow cooked lamb shank didn’t disappoint. I wonder if the comparison between slow braised cuts and fast grilling in the lamb dish might be more interesting if the chops were cooked rare, but the flavours were still good. In any event, an outstanding side of sticky spiced baby aubergines came close to overshadowing all that had gone before and everything was scooped up with relish using the super selection of breads. The two of us also shared a refreshing mango rice pudding, but even using our emergency reserve dessert stomachs, that was a bit of a struggle. What a feed.

An absence of micro herbs, sauce smears and slate helps Gymkhana to stand out against its top end peers, not to mention the trough of aspirational ‘modern Indian’ restaurants that sprung up sometime last decade and haven’t moved on. Beautiful crockery, a designer setting and elegant waitstaff provide a certain aesthete but, ultimately, the star is the food; the dishes that I tasted stand up to any taste test, whether western or Indian, and I keep hearing that others do the same. Prices are ball clenching high but just about justified, I think, by the quality of the food, the service, setting and location. You could eat at a decent mid level Indian restaurant for half the cost, but this is twice as good. Of course that makes it harder to return to try the myriad dishes you couldn’t have the first time, and therefore even harder to order. I’d recommend asking the advice of the chap that served us and helped shape our meal, but, you know, he’s moved on to a higher place. So maybe just go in a group of 3 or 4, order lots and share the pain.

For full disclosure, I ate at Gymkhana as a guest of the restaurant. Which was nice of them – though I’m confident I’d have written the same without such treatment.