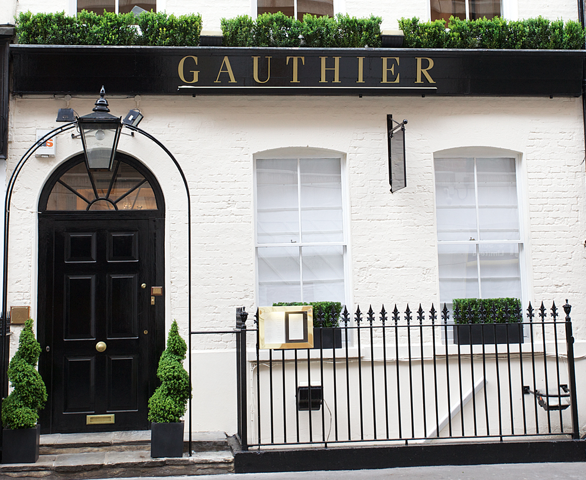 About 12 years ago, my Geography teacher came back from a training course and explained how he’d been told that he should precede each negative comment with 4 positive ones. He then demonstrated his loose interpretation of this philosophy.

“James”, he said (for that may or may not have been his victim’s name)

“Your hair is not as scruffy as normal; well done for making it in today; your tie looks ok for once; there’s a small possibility your life won’t be a complete waste of time …”

“…and this is the worst essay I’ve ever had the displeasure of marking”.

He then proceeded to take James apart for the next 15 minutes. His view being that the positive comments should be brief, and that it was ok for the negative ‘one’ to be a discussion of a theme, rather than a single point.

I’m afraid that’s how I’ll have to treat Gauthier, a French fine dining restaurant with small dining rooms and a hushed atmosphere, set over a number of floors of a Soho townhouse. I was lucky to have been taken there a couple of weeks ago. We ate in one of the private dining rooms.

The bread was really very good. Massive selection. A folded white bun with tomato and basil leaf layers was my favourite. Brown artisan with raisins was also good, as were many others. Bizarrely plentiful though – new baskets were brought with, and in between, every course.

Our second plate – white risotto with morels and veal jus – was a highlight. The rice was virgin white. It was creamy but loose and still with a bit of a bite. The veal jus was rich, both in colour and flavour. The little morels were punchy too. This was quality.

The rest of the food was pretty good (but not amazing or without fault). Classic fois gras terrine was smooth and, well, classic. Scallops and pancetta were neat. Halibut poached in milk was tasty, though I think a little overdone. It was served with a lovely spiced leek sauce and pommes fondant. Racks of lamb looked great at first but were actually too rare – I think I may have heard one of them bleating (ok, so the lamb makes it into the ‘positive’ section because this is where I’m dealing with the food). Good cheese plate (nice selection, well kept), very good (though dare I say slightly over hyped) signature dessert – the ‘Louis XV’ chocolate ganache/mousse/hazelnutty basey thing.

Excellent wine and fizz. Though it was pretty premium stuff, so absolutely should have been.

That’s the four ‘positives’. Now to reach for my Henckels…

From the moment we entered Gauthier, to the point our coats were (eventually) distributed, service was remarkably poor. I don’t usually like publicly moaning about service – I take the view that no one tries to be incompetent and things happen that are often out of hard working people’s control. But sometimes, like when significant amounts of money are at stake, you shouldn’t have to be making excuses.

You have to ring the bell to enter Gauthier. I quite liked that. But then we were met by 3 virtually mute and uncertain waiters.

I think the problem was that nobody seemed in control. Who was the manager or the maitre d’? There was no leadership, and certainly no proactivity. We eventually instigated movement to our room, asked whether there was somewhere for our coats and, after further awkward silence, whether we could get some drinks.

The hesitancy and uncertainty continued through the meal; whether for bringing round drinks, changing cutlery, removing finished plates, even serving up the food. I’m not convinced anyone had been doing the job for long – to be honest all except the head sommelier (who wasn’t involved in our meal) looked as though they should have been at home studying for their mock GCSE exams.

There was a real stink up over our main course – one of the party was without their’s for 30 mins. We had changed our number last minute and there may have been a mix up here (so I’m not hanging any blame here) but the way it was dealt with was utterly bizarre.

In any event, for each course the group’s food made it up the stairs at staggered times and was luke warm by the time we all tucked in; there was no description of the cheeses (nor an opportunity to ask as the waiter ran from the room – presumably so as to make it home before a curfew); petit fours came once everyone had finished their teas and coffees; no one knew where the coats and bags had gone (clearly we should never have asked for them to be taken).

As much as I’d rather find excuses, you pay for the whole package, not just the food on these occasions. The issue of service (of lack of it) shouldn’t be the most memorable part of a fine dining evening. Check out these sage words from Oisin Rogers and Russell Norman – two guys who really know the value of service and how to run a front of house team.

Gauthier got a Michelin star two days before we were there. My trips to two of the other newbies (Galvin La Chapelle and Viajante) were recent enough to be relevant comparitors and on the back of my visit, I’m afraid Gauthier doesn’t compare well with either of them.  Even accounting for the fact that Viajante was a bit hit and miss, the technical competence, originality and ambition of the food far exceeds that of Gauthier. More significantly, the package of food, atmosphere and utterly professional service at La Chapelle is not just stars but galaxies beyond Gauthier.

35, 45 or 55 pounds for 3, 4 or 5 plates.  We drank some very nice and no doubt expensive wine – I think there were a few on the menu that edged towards more modest prices.

Service is not included.