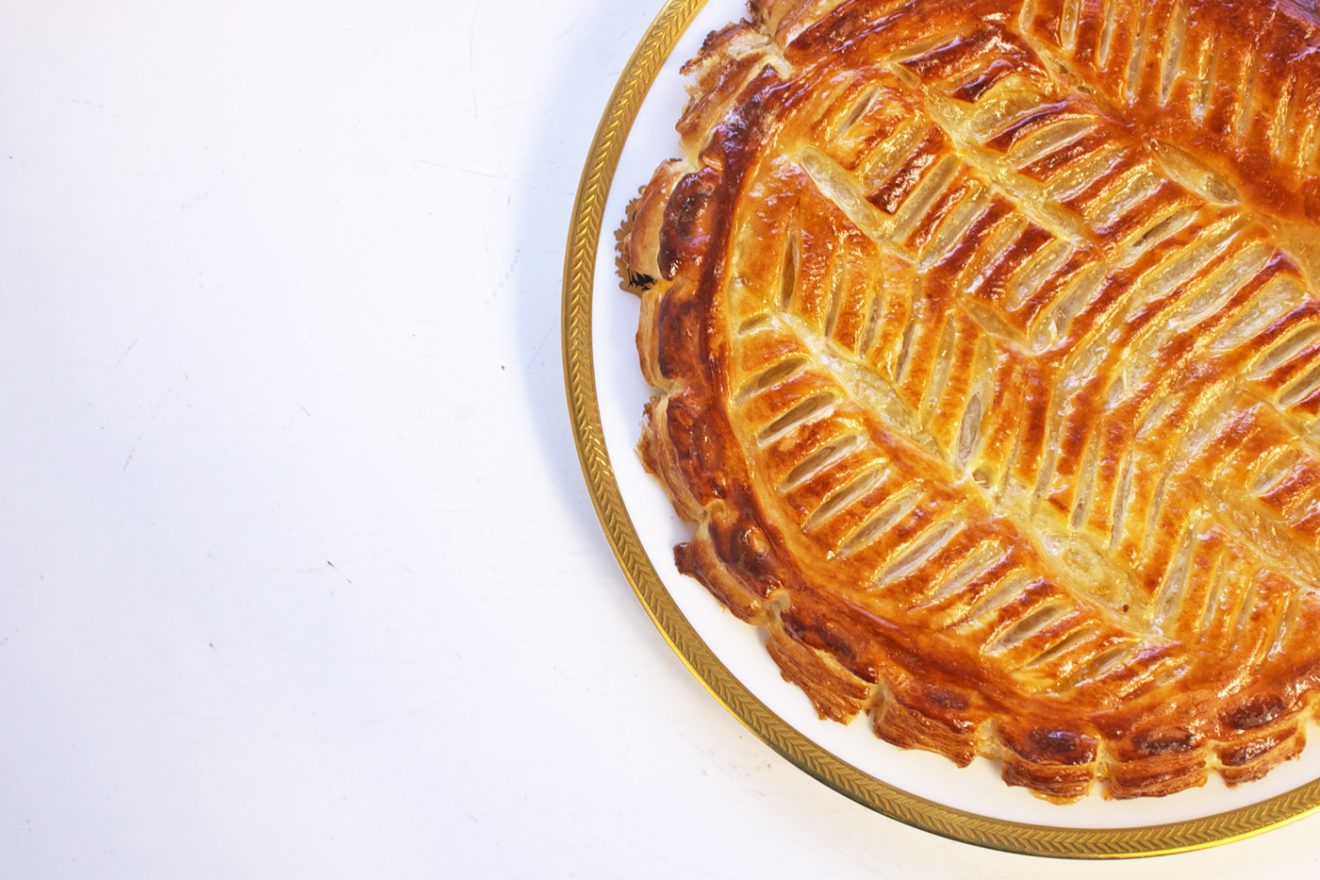 It’s the first week of January. Which means there’s an awful lot being written on the subjects of dieting and detoxing. I’ll mention a bit more on this in tomorrow’s Supplemental, but I wanted to throw just one thought into the fire beforehand: why aren’t more diets based on The French Paradox?

It just seems a bit odd that the papers are full of raw alkaline sprouting no carb juice diet plans and bootcamps when, on the whole, these fads stem from the United States, the most grossly obese nation in the world (more than 35% of the adult population tip the scale into the danger zone).

At the same time, we are told to reject traditional, French focused cuisine, despite the fact that our croissant munching, red wine swilling, full fat cheese mongering cousins are doing perfectly fine. Only 14% of them are chubsters (the UK’s adult fatty rate is 24.7%).*

I can add casual observation to the irrefutable statistics too.

Six years ago I lived in Toulouse. I was, at the time, on secondment to Airbus and can honestly say that I don’t recall seeing one fat person on the campus. Not one. This is a place where (when they weren’t striking) every single person took an eighty minute break so that they could have a three course meal for lunch. Steak, chips, custard and cream based puddings and pastries every day. There was wine and beer on tap too. Yet no one was fat. Riddle and spiralise me that.

So here’s a timely recipe for the New Year.

On 6 January, the Frenchies won’t be downing celery and beetroot juice, or naughtily sneaking the corner off a raw mung bean ‘brownie’. Nope, they’ll all be eating a puff pastry sandwich tart cake thing, which had got a thick, rum soaked and buttery frangipane centre. It’s known as a Galette des Rois. Literal translation: the King of Diet Cakes. True story.

* OK, we ought really follow the Italians, whose carb heavy pasta and pizza diet leaves just 10.4% obese. Or, even better, Japan, where only 3.6% are horribly fat (and surely they’re all sumo wrestlers). But I only had this recipe handy, so had to go with the French.

Cream the butter and sugar until light and a little fluffy. This is easiest in an electronic stand mixer.

Add the ground almonds and cornflour and mix until well combined.

Then, one at a time, add the eggs, stirring constantly and ensuring all the liquid from the first egg is incorporated before adding the second. Add the rum and stir well. Scoop the mix out into a small bowl or container and chill.

Cut the puff pastry block into two – one size marginally bigger than the other. On a well floured surface, roll to 3-4mm thick circle come square. It needs to be evenly spread, so that you can fit a plate with a diameter of 25 cm on top.

Cut round the plate. Put the trimmings on the second, unrolled, piece of pastry, and lift the circle of pastry onto a baking sheet. This is your base.

Roll out the remaining dough and cut to the same size.

Spread 30-40g of apricot jam onto the base. Start from the middle and spread outwards, leaving 3cm to the edge of the pastry uncovered. Then spread the almond filling on top of that, leaving the same distance from the edge.

Make sure the almond paste is level. Wet the uncovered pastry with a damp pastry brush. Place the second circle on top of the first and firmly push the edges together. Put in the baking tray and galette in the fridge to chill for 30 minutes. This is an important step as it allows the pastry layers to bond, and is much easier to cut and decorate when cold and firm.

After 30 minutes (or longer if you wish – you can do the above in advance), turn the oven on to 210C and remove the galette from the fridge.

I fluted the edges of my galette (push two finger down onto the edge of the pastry and use the back of a knife to pull the middle towards you. But I’m not sure it’s worth the effort. But do definitely score the top of the galette with a sharp pairing knife. Just cut the pastry a little with fast, precise, confident swipes. Try not to cut all the way through. You can do lines as per mine, or more of a pithivier style spiral. Pierce the pastry in a couple of places (ideally on a mark that’s already bean made) with the tip of a knife – this will help air to escape and the pastry from blowing up too much.

Brush liberally with a mix of egg yolk and milk. Then put in the oven for 35 minutes.

After 15 minutes, remove from the oven and brush more egg and milk on top of the pastry. Rotate the baking tray round so that the tart cooks and colours evenly. Cook for 10 minutes more, then turn the oven down to 180C for the last 10 minutes so your King cake stays golden, rather than darkens too much.

Remove from the oven and brush with the remaining apricot jam. The pastry will deflate a little as it cools – which is a good thing. I like it a room temperature or even cold. But you could put it in a warm (100-120C) oven for 5-10 minutes before eating. 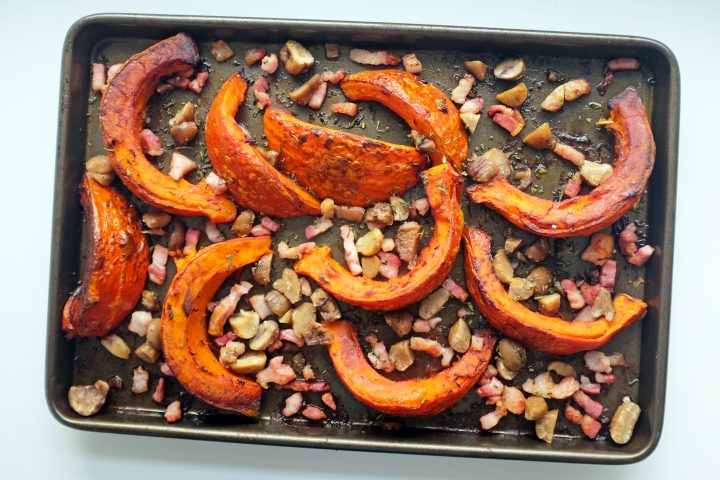 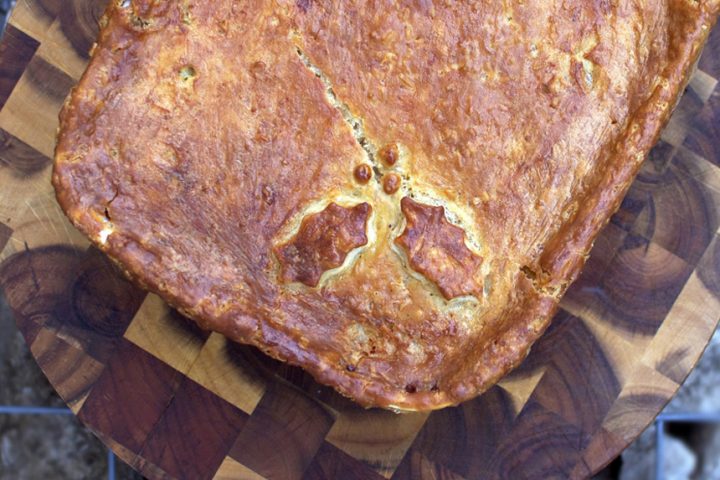 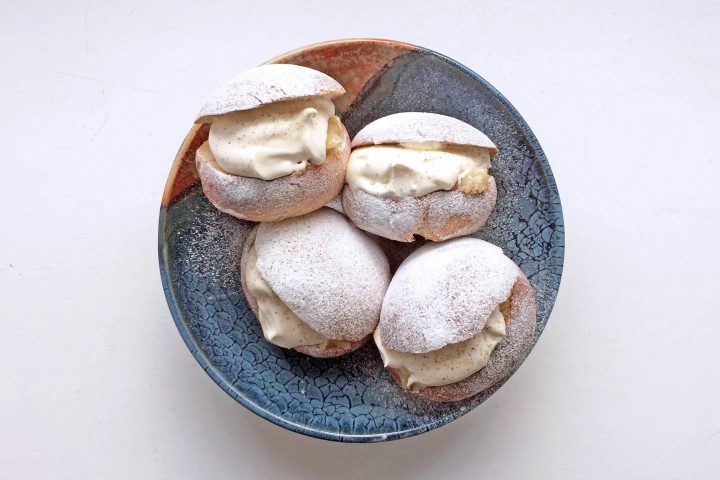 One thought on “Galette des Rois”