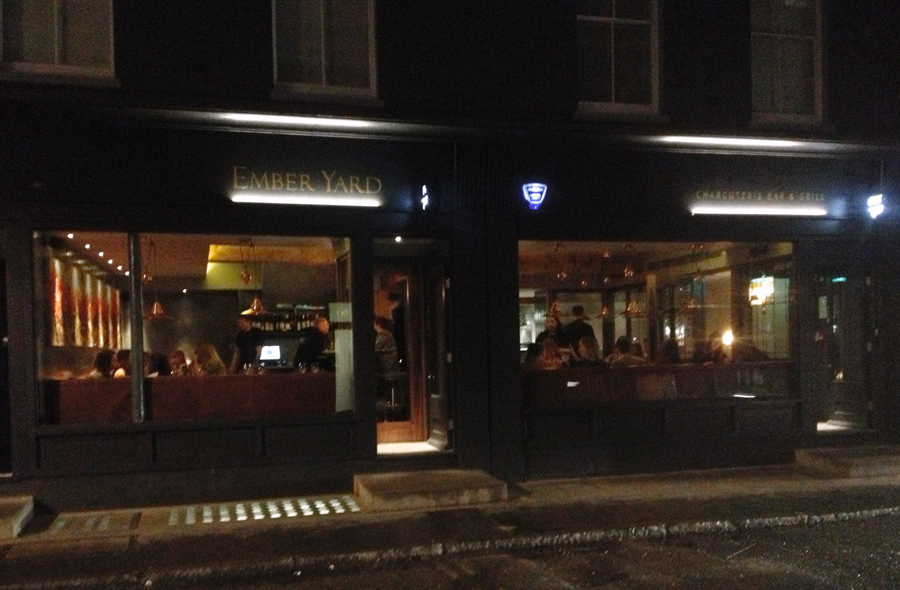 Ember Yard is the fourth restaurant from the Salt Yard Group. Like the others (Salt Yard, Opera Tavern and Dehesa), this restaurant is inspired by the cuisine, produce and wine of Spain and Italy. They distinguish Ember Yard, though, by its grill, stoked with the charcoal formed from quality woods. It’s at the Oxford Street end of Soho, but think hot, alfresco, one-off holiday memories from the Mediterranean, rather than a damp suburban BBQ tainted by acrid smoke from lighter fluid and garage forecourt bricks.

The set up is sleek and sexy; on the stylish side of informal. High bars and stools in the centre add an air of conviviality to a room otherwise edged with solid tables, chairs and banquette seating. I had the bum seat in the house, but it mattered not. Fire coloured art spreads across one wall and, elsewhere, hints of burnished wood and sight of the open kitchen fit with the smouldering theme. This is well designed date territory – whether you’re flirting with a new flame, or for new business.

The menu covers two sides of A4: bar snacks, cured meats and cheeses on one side; and on the reverse, more substantial meat, fish and vegetable ‘tapas’. At first glance it feels a little like option overload. Our excellent waitress suggested that if you’re there for a meal (as oppose a few drinks and light bites), then take a few nibbles from the first side, followed by two or three tapas per person.

It’s possible the snacks at the start of our meal were the best things we ate. All were fairly simple – fat, juicy Gordal olives, smoked anchovies, sweet and occasionally fiery guindilla peppers – but they were of a high quality. The olives were stuffed with goats’ curd, blood orange and pistachio, so were earthy but also fresh and light. A real burst of flavour. The anchovies were white, plump and firm and came on a mattress of smoking charcoal. They were fresh and more like little finger sized pale sardines, than the pickled or salty floppy anchovies found in deli counters. That still hot charcoal gave a hint of BBQ. All in all, the kind of thing to turn an anchovy hater. Knockout with a glass of dry sherry, I should imagine.

From then, hot dishes came at a steady and well managed rate. I say dishes – most were slate platters. Which is a form of presentation I’ve always had a gripe with. It works for cold meats and cheese. But for cooked items and sauces the aesthete is dated (and always has been). On a boring logistical level they’re impractical for waiters and waitresses who struggle to clear a table of relatively weighty, un-lipped squares. Rant over.

A number of those platters were excellent. Little rounds of pork shoulder – Ibérico Presa – charred on the outside and pink in the middle were tender and sweet and held their own against an edge of smoky paprika and salty ‘whipped jamon’ butter. A lamb chop was invitingly charred and juicy and accompanied by smokey aubergine (hints of baba ganoush) and a salsa verde that cut the fat nicely. I think an octopus dish was also top drawer – tentacles blackened and crisp from the flames, but pillow soft inside and matched well with intense pepperonata and a light alioli. But had the flames dried the cephalopod too much? And were a couple of relatively small tentacles and a spoon of each sauce really right for £8.25?

Similar niggles returned in other dishes. None of which were bad, though neither did any of them wow. Five or so rhomboids of cuttlefish were grilled to just short of rubbery. I got none of the hit of n’duja I was hoping for and roast pumpkin was more baked and dried, rather than glistening, caramelised and sweet as I’d hoped. A pear salad jarred a little. We found three very small grilled pear segments, two nuggets of chestnuts and a few other leaves in the smallest of brown tapas pots. There was the tiniest, weeniest hint of Castel Franco leaf, and I’m sure the other leaves were expensive n’all. But it was hard to not compare to child sized handful of supermarket lettuce and wonder whether £5.75 for something even smaller than a normal side salad is appropriate. Seasonal greens with lemon and chilli were good. But on reflection also on the pricey side.

Take a look at the dessert menu. It’s mighty tempting. I’d happily have had any of the options (brown butter panna cotta, Malaga raisin ice cream and spiced biscuit, for example), but plumped to share a cheese plate and a very good date, walnut and quince cake with smoked muscavado ice cream. The Spanish selection of cheeses finished the meal as we’d started – with impeccably served, interesting, well sourced and kept produce.

I left in a little bit of a twist.

On the one hand, this is a beautifully presented restaurant, serving (on the whole) interesting and flavourful dishes. Service was at all times spot on and the bar snacks, charcuterie and cheeses are first class – as mentioned, a couple of glasses of sherry and any number of treats from the first side of the menu will be an hour or so spent wisely. On the other, whilst the hot dishes are never less than fine, few of the ones we tried were knock out. The charcoal theme didn’t shine through as strongly as I hoped and, crucially, the bill climbs rapidly up.

I like the Salt Yard group. Their restaurants are proper – decent food, wine, great service, lovely rooms. Ember Yard is no exception and it certainly adds to the central London scene in that it is a sleek yet informal restaurant that you can actually book. But at just short of £70 a head for about the right amount of food and only two glasses of wine per person, I think I’d personally rather spend £20 less for a casual hit of tapas at Morito, or £5 more for the full works at The Clove Club.

£60-75 per head if you’re doing anything more than grazing.

One thought on “Ember Yard”