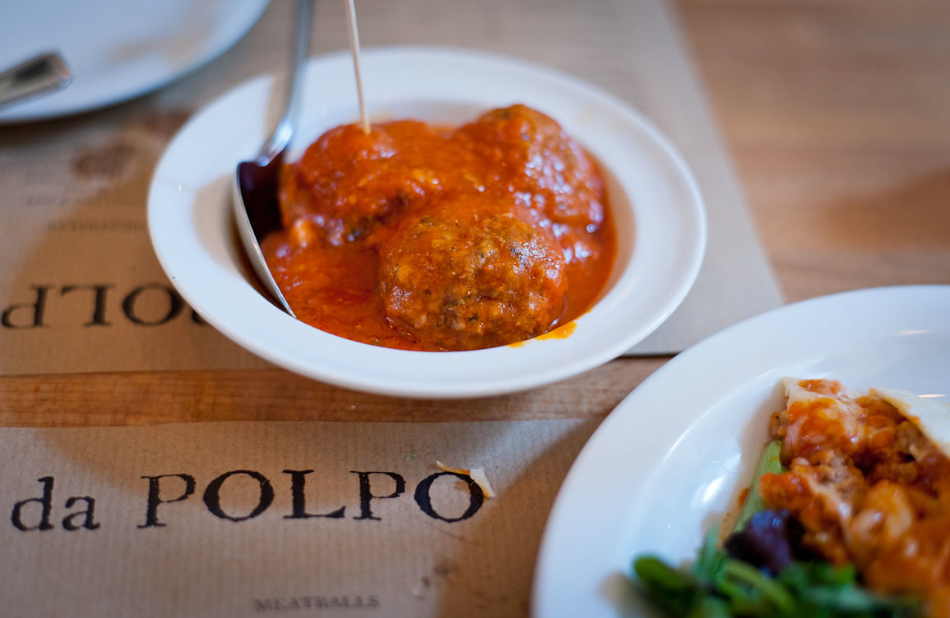 [Editor’s note, June 2012: da Polpo is now Polpo Covent Garden. The menu follows the format of the original Polpo in Soho. Other details remain as in this post.]

The idea of a ‘no bookings’ policy is sometimes referred to as a democratic seating system. The point being that a table at a no bookings restaurant is available to all, on a first come, first served basis. Everyone is represented equally, regardless of whether they might normally plan their social lives months in advance, pay silly money to toffs running concierge services, or only ever make a spontaneous decision to eat out.

The problem is that at the super busy and popular no bookings restaurants, the process feels about as democratic, fair and sensible to those arriving at the back of the queue, as the Olympic ticket allocation process does to the vast majority of Britains.

But, as Karl Marx once said, democracy is the road to socialism; in time, the heaving but deserving proletariat will prise power from the ruling restaurateurs and everyone will be seated. Some might argue that we are already moving down this road because lo, the people’s champion, the guiding light of modern restaurateurs, Russell Norman, has opened another Polpo spin off so that yet more workers could experience Venetian casual eating. The class struggle is succeeding.

Well, not really. Not least because we must remember that a democratic seating system also benefits busy restaurants as it ensure bums on seats; there’s no wasted time (or profit) as it avoids tables for 8 turning up in dribs and drabs, or not at all. Filthy capitalist restaurant owners.

Fundamentally flawed political analogy aside, the opening of da Polpo last week (the 4th offering from the Polpo stable in the space of 20 months) is a good thing. 70 seats … an all day menu … bigger tables … good value tasty food, trendy cocktails, great wine and, er, a booking policy (from lunch through to 5:30).

There are clear Polpo touches – the brown paper menu (and the small plate genre of it), the little drinking glasses, the bevelled ceiling, vintage fittings and exposed filament light bulbs. But it’s also lighter, brighter and airier than its siblings. Less obviously cool. Those light bulbs are up a wattage or ten; the music is more mainstream; and not all of the staff are walking works of tattoo art (though, thankfully, the very competent front of house is). This is, of course, absolutely the intended vibe. Soho cool would not suit the masses of Covent Garden.

What of the food?  My comrade and I really enjoyed what we shared.

As at Polpo and Polpetto, there are Cicheti for a couple of quid a hit – the arancini (deep fried risotto balls) were super; the grilled fennel and anchovy so, so. Some vegetable dishes are available (salads mostly) but we didn’t bother with those. There is also a pretty eclectic offering of bigger ‘small’ plates. Super looking mozzarella and broad beans, an excellent plate of calf liver (really excellent, actually), asparagus, parmesan and unctuous buttered [scrambled] eggs were just some of the options.

It’s the Pizzete and the Meatballs that are particularly ace, though.

Pizzete are small pizza. Both the ones we tried had pickled items on them (pickled radicchio with Gorgonzola and pickled peppers with pork shoulder). I thought these really unusual and utterly successful.

Not as successful as the meatballs, mind. Three hefty lamb and mint meatballs were soft, succulent and served in a thick tomato sauce.  After them we took pork and fennel meatballs in the form of a Piadina meatball smash. Pulverised meatballs, cheese and sauce inside soft flat bread. Boom. Really enjoyable.

For afters I had what I always have at Polpo/etto: an affogato. As per normal I loved the fact my dessert cost a mere two and a half pounds. Also as per normal I cursed the fact that they don’t serve the coffee separately to the ice cream, so that you can’t pour the shot of coffee yourself and therefore you never get a temperature contrast. Looking around, I probably wouldn’t have cursed so loudly if I’d strayed from the norm and gone for a gelato cone or a tiramisu pot.

All in all a good evening, great service and a quality new addition to central London eating. But it would be fair to say that da Polpo is not my favourite of the Polpo spin-offs. In fact I’d go as far as to rank it fourth out of four. This is mostly because whereas Polpo, Polpetto and Spuntino do an amazing job at generating an electric atmosphere, da Polpo does not. Or at least its atmosphere suffers by comparison.

To be absolutely fair, this newbie is not supposed to be hyper cool and, importantly, it is still enjoyable and worth a visit. It’s also worth noting that whilst it’s doesn’t achieve quite the same atmosphere as it’s forebears, it does succeed in being exactly what the owners intended. Tasty, casual and accessible to all, da Polpo is the bacaro of the people.

p.s. Have a squiz at my Polpetto and Spuntino reviews if you’re interested in the other restaurants. I’ve never felt it necessary to add to the pile of Polpo reviews; go to Urbanspoon for quick access to the views of others.

p.p.s.  This pencil sharpener might be my favourite item in the whole restaurant (meatball smash included):

Finally, thank you to Paul Winch Furness (www.paulwf.co.uk) for the use of his rather good photos.