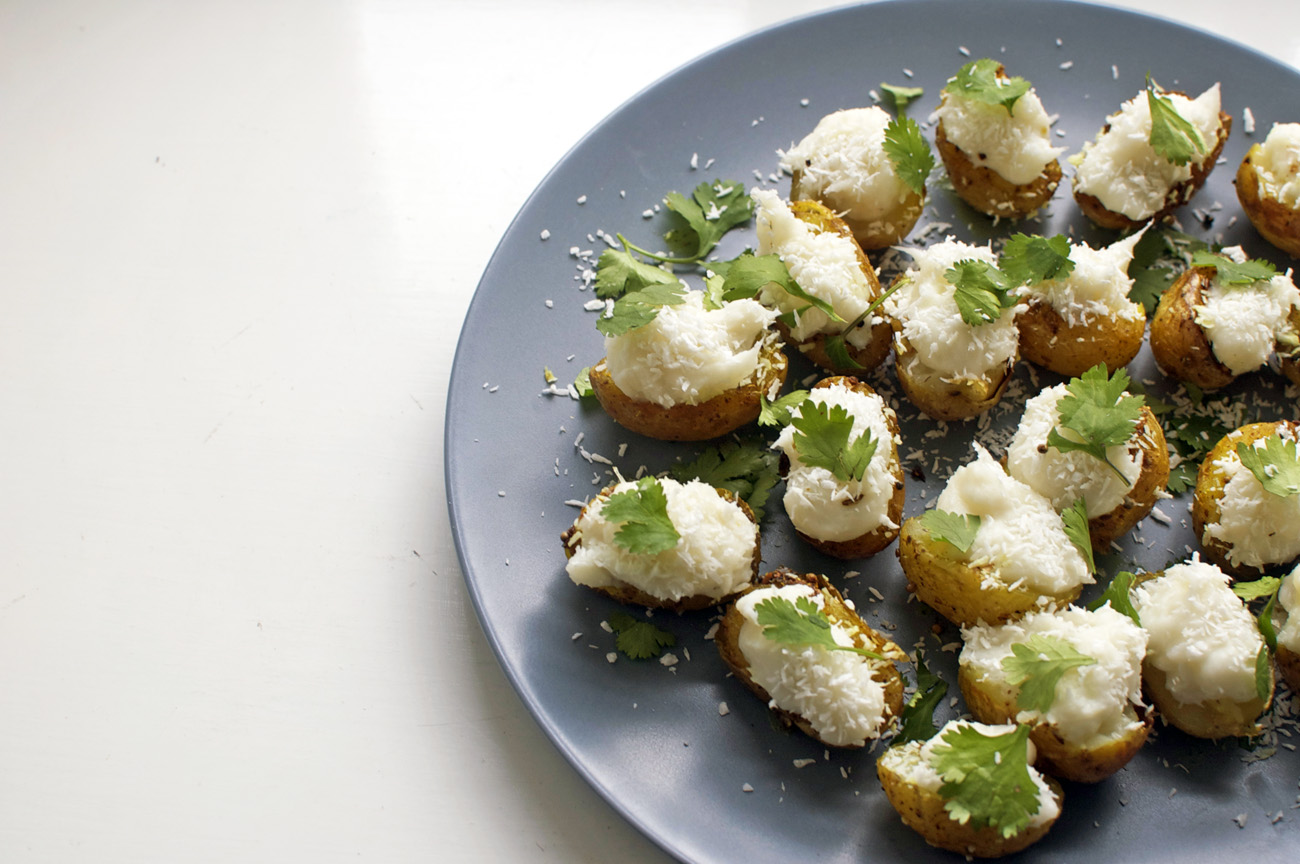 We’re into it already, aren’t we? You know, The Dreaded Christmas Drinks Season. Maybe you’ve already had your fill of salmon blinis, supermarket dips and honey and mustard cocktail sausages? If not yet, then soon, I’ll wager.

I actually quite like all of the above (including most supermarket dips). But it is nice to just occasionally have something a little different.

Those good people at Lurpak ran a competition on this theme recently, and have since asked me to cook up one of the winning flavour combinations.

My interest was piqued by someone’s suggestion of filling those ‘appetiser spoons’ with “cod, Bombay potato, grated coconut, coconut cream, basil and coconut oil”, and so have worked on something incorporating most of those …

Why are they a good party snack?

Loads of reasons, really: the curry / coconut combo is a lively one; you can prepare them in advance and reheat at the last minute; the potato skins are crisp, nutty and mega flavoursome, thanks to the fact they were loaded with Lurpak Cooks Range clarified butter and blasted in a hot oven; the coconut brandade is silky and smooth, so a good contrast both in flavour and texture to the spuds; and the desiccated coconut sprinkled on top makes them look ridiculously kitsch, and therefore perfect for Chrimbo.

It’s nigh on inevitable that they’ll be on Marks and Spencer’s canapé shelves this time next year. So have a crack at them now so you can say you got there first.

You can make this well in advance of needing the bites. Make the brandade and keep in a sealed container. Par boil and roast the potatoes in spices. Then reheat each component just before plating.

Put the baby potatoes in a saucepan, fill the pan with water, bring to the boil and simmer for 15-20 minutes, so that you they’re soft enough to just push a fork through (but not so soft that the potato breaks up). Drain. Cut each in half lengthways with and put them in a small roasting tray and add the Lurpak clarified butter – so that the residual heat melts the butter.

Whilst the baby potatoes are cooking, heat half the mustard seeds, the cumin and coriander seeds in a dry frying pan for three or four minutes until they start to pop and smell toasted. Put in a pestle and mortar with the peppercorns and sea salt and pound until finely ground. Add the ginger and turmeric, mix. Put on the baby potatoes once they’re drained and covered in butter. Add the remaining mustard seeds and toss so the potatoes are covered in spices.

You’ll have time to do at least three other things whilst the baby potatoes are cooking.

Firstly, peel and dice the larger potato. Put in a small saucepan, cover with plenty of salted water, bring to the boil then simmer for ten or fifteen minutes until soft. Drain.

Secondly, put coconut milk in another small pan (you may need to heat this so that the solids and liquids are combined). Add the cod loin (ensuring it’s covered by the milk) and simmer for eight minutes. Turn the heat off and leave the cod in there until it just flakes away.

Put the baby potatoes in the oven and cook for 20-30 minutes until the skins are just turning golden brown and crisp.

Mash the diced, cooked and drained waxy potato, then give it a quick beat or two with a wooden spoon. Add in the cooked cod – which will flake nicely. Beat this together so you’ve a fluffy paste. It takes only a little effort. Now add three tablespoons of the coconut milk cooking liquor (it’s about 45ml for 3 tablespoons). Beat until it’s all incorporated. Repeat. Then add 45 ml of olive oil (this’ll give a nice gloss to the brandade). Beat until incorporated. Then add another 45ml of coconut milk. Beat well. Add a pinch of sea salt and just a squeeze of lemon to lift the flavour. If you’ve more coconut milk left, consider adding it in. The texture should be somewhere between clotted and very thick double cream.

Try to serve the bites warm. In reality, that means preparing the brandade and potatoes ahead of your dinner, and reheating when you need. You can warm both the potatoes and brandade in a low oven (70C) for 15 minutes.

Either fill a piping bag with the brandade or just spoon it on to each potato half. Sprinkle over desiccated coconut and ensure there’s at least a little coriander leaf on each bite. 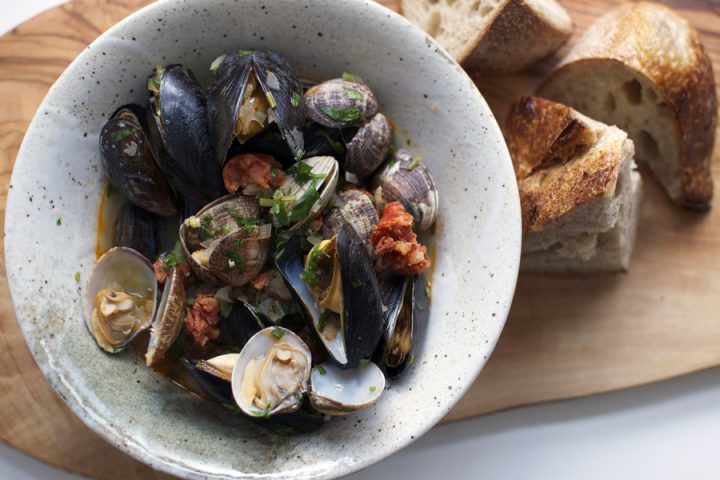 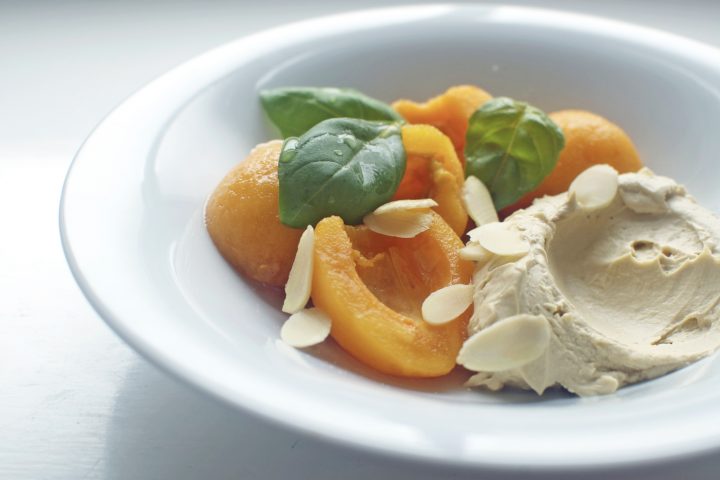 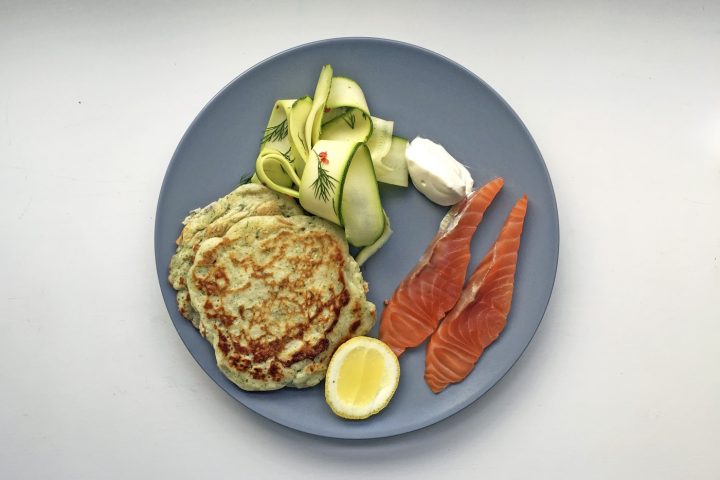