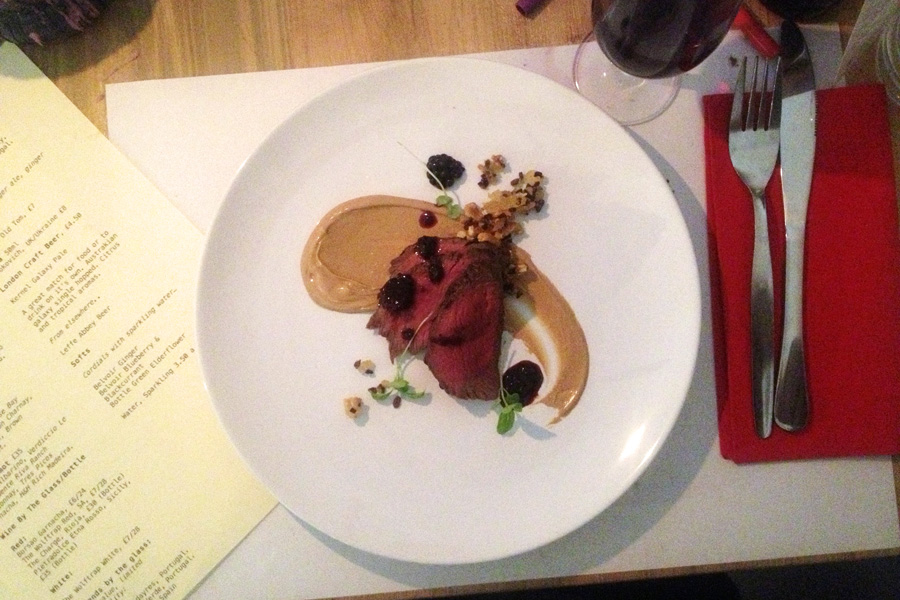 Supper clubs and pop ups died somewhere towards the end of 2012. Hey, it was fun while it lasted and I enjoyed eating at a number, cooking at others and hosting my own. But, yawn, jog on. Nothing to see here.

From 2009 through 2012 we experienced an exciting, exploding, ‘underground’ dining scene: we broke bread and downed shots with strangers; came home buzzing after one-off nights where the next big things in food did their best to impress; and had the opportunity to eat gloriously amateur, home-cooked banquets, which showcased cuisines from distant lands.

But for me, and I assume others, the general concept lost its appeal some time ago. I still went to events last year and cooked at some too. In all honesty, though, something was nagging. For sure, this was partly because it wasn’t new to me anymore. There was a sense, too, that many were ‘popping up’ rather cynically. But perhaps my biggest problem (and this is linked with the last) was that it often felt that my £35-45 per head pre booze would have been better spent at a restaurant where they do their thing, really well, every night, in appropriate and permanent surroundings.

I was only a little intrigued, then, to be invited to a night hosted by Chateau Marmot at the end of November (see what they did there? Chateau Marmont, a renowned swanky hotel and restaurant in California; marmot, an elusive fat squirrel that tends to pop up from its burrow).

Reading up on them, Chateau Marmot seemed to be a smart looking outfit, who organise ‘fine dining’ nights in temporary spaces. They use professional, well grounded chefs, and appeared to have a good track record. After some laboured pondering, I decided to give the event a go.

Imagine my surprise when I walked into large room, stacked with around 90 diners, all seemingly having a cracking time. 90 covers! That’s twice the size of your average restaurant. It was buzzing. What was that about pop ups and supper clubs being dead?

Imagine my further surprise, when my mood ended up matching everyone else’s.

The dishes came out at a decent pace, which was no mean feet given the number of guests. Wait staff buzzed around efficiently and the kitchen had been smart enough to ensure the first 3 courses were essentially cold assemblies (of otherwise long prepped items). Here’s a free tip to all prospective pop ups: keep things manageable and easy to deliver.

That crazy ingredient list of a menu ensured no one wondered why they’d come to an industrial building in Wapping for a dinner they might have got elsewhere. Tempura whitebait came with green matcha ‘salt’ and tosaka (three colours of seaweed) – and was good. We had mushrooms, not fish with the aforementioned tuna dish. An unfortunate mix up, but kimchi tapioca and persimmon pico de gallo were complementary textural and flavour companions to the shrooms in any event.

The best course was a seared venison dish. The meat, as you can see, was served on top of a swoosh of caramelised yoghurt, with a peanut, stem ginger and cocoa nib crumble and fresh blackberries. The venison was cooked perfectly and well seasoned (again, difficult for the numbers). If the yoghurt was the last legitimate hurrah of the whole plate smear, it was a super way to go out – unusual but not unnecessarily so; tangy, sweet, rounded, and well matched to the gamey deer. The black fruits stopped things getting sickly, and the nuts and crumble kept things savoury. Good stuff.

Not everything was perfect – there was the tuna / mushroom slip and if the fourth course (poached cod in butter dashi with liquorice) was meant to be cold it really shouldn’t have been. But I was impressed. In part by some the food, but mostly by the overall package. There was a well run and stocked bar, including decent value wine flights. The event was staffed properly by people who knew what they were doing. Ultimately, a large room of people had what is known in the trade as ‘a good time’.

So there I was (and still am) feeling like a bit of a miserable mug. Had I just been completely wrong?

I was, no doubt, a bit jaded. Of course supper clubs and pop ups aren’t dead. They are, and will remain, a totally legitimate and fun dining experience. At good events, it’s very different to going to a restaurant: it’s a full night. There will always be people for whom this is a new and exciting thing. Which is great. On the flip side, this is a massive genre. I (deliberately) used ‘supper clubs’ and ‘pop ups’ side by side above, fully aware generalisations are even less useful now than they were in 2009. Some established supper clubs are effectively professional restaurants. Others are one-off and amateur in every sense. Some events surprise and delight. Others are clearly there to make quick buck. Many supper clubs and events will, quite simply, not be as good as going to a restaurant, perhaps not even as good as eating in your own home.

There are a number of supper club hosts I massively respect and heartily recommend (Uyen Luu and Asma Kahn, for example). I certainly don’t want to piss on their fire (or hard work). I will always be interested in the more organic chef ‘pop ups’ (think Nuno Mendes and the Loft Project as oppose the Electrolux Cube) and there are ‘pro’ popper uppers, such as Chateau Marmot, who appear to offer decent events too. Dare I say it, I still think about doing my own thing – but only where I know the space, the whole package, make it more than just a good meal.

£45 for food. Drink on top, priced as at a restaurant. My brother and I were guests of Chateau Marmot when we went. There was enough food and the many staff left me thinking the money others passed over was well spent.

www.chateaumarmot.co.uk  – CM have an event scheduled in SE1 at the the Lower Marsh market over 28 Feb – 2 March. £24 pp for brunch, £44 pp for dinner. Drinks extra. Book through the web link. 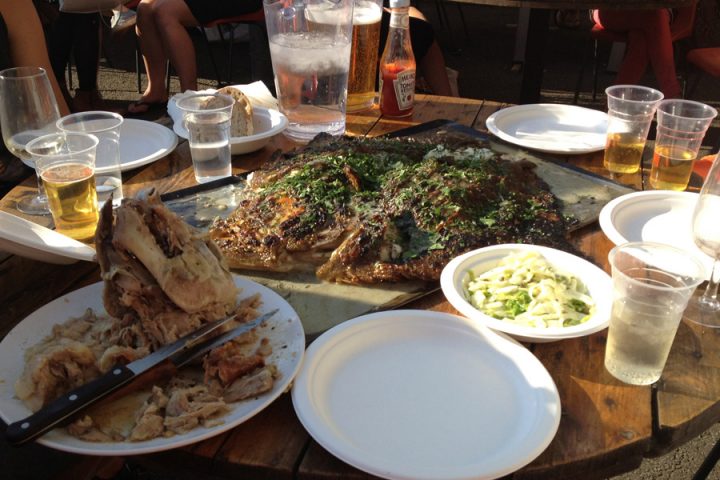 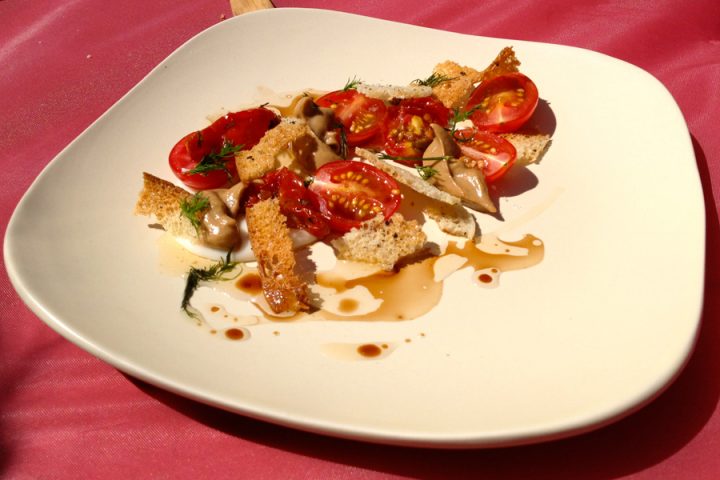 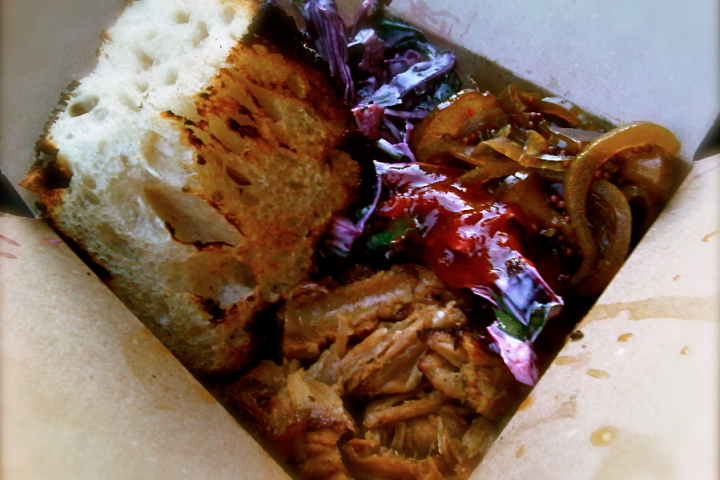