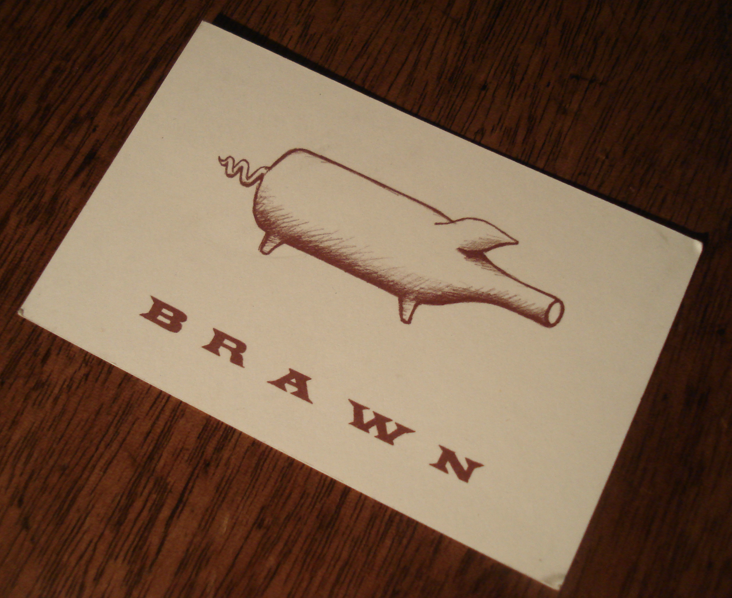 One of my brothers and I noticed over Christmas that Mum had placed 11 pig products on just one fridge shelf: a ham, black pudding, sausage meat (for stuffing), parma ham, local butcher’s sausages (pork and Pershore plum – still the best ‘novelty’ sausages I’ve had), chipolatas, streaky bacon, smoked back bacon, non-smoked back bacon, ardennes paté and a pork pie. It’s quite probable there were more food stuffs originating from swine elsewhere. It struck me that, though my instinct is to rank pork below lamb, beef and chicken, our friend the pig is actually pretty darn tasty and the source of a considerable variety of great meat.

Clearly the owners of the recently opened Brawn on Columbia Road (Shoreditch) had this epiphany way before me. Aside from the general piggy theme, much of the food in this wine bar/eaterie is hog based; there’s even a section of the menu titled ‘pig’ (though don’t be put off if you can’t eat pork – there are other options too).

The concept is similar to Terroirs (near Charring Cross), i.e. ostensibly a wine bar, but actually somewhere that serves great small plates of food to share in a casual, chatty environment. This is not a coincidence – this is the younger sister of Terroirs. I like Terroirs but am happy to say that, as second borns generally are, Brawn is an improved version of its sibling.

Brawn’s style is quite East London (paired back; bare, unvarnished wood finishes; mismatching tables of different sizes) so it fits with the surroundings. But there are expensive looking classy touches too. Look at the fittings on the windows. And the cutlery (I loved the cutlery – the knives were particularly cool). The furnishings have a quirky edge, but there’s a quality that says style, rather than fashion.  The restaurant is split over two rooms, both of which have corners of activity – the first has the bar, the second, the kitchen (ask to sit in this room if you can). Overall, the general decor helped to create a contented buzz amongst the punters; and made it exactly the kind of place I like eating in.

The food is relatively simple. But nonetheless very tasty. I imagine that if you ask, someone will tell you that there’s an emphasis on provenance and seasonality; letting the ingredients speak for themselves and so on. That feels a little bit like PR guff these days. But even if the words are tired, a product based on that philosophy is still attractive. Hand chopped Tuscan style beef was a prime example of why it still works. Effectively this was a rustic beef tartare, minus the egg and subtly flavoured with rosemary. Simple but supremely tasty.  Yum. Maybe we could’ve done with the option of a pile of salt on the side, but it was great in any event. Particularly the texture; I now get why people say that hand chopped tartare is superior to machine minced steak. The bitter leaf salad we ordered on the side was a good addition – the sharp dressing and crunch of the lettuce providing a perfect contrast to the soft beef. Well done us.

We really enjoyed a portion of mongetes – a Catalan version of a cassoulet, served in the dish it had been cooked in. We loved the dense, meaty sausage and the smokey and flakey chunks of pork. We also liked that the sauce was thin and the beans soft (but not mushy). In fact, I think I preferred this to any bean based stew I ate during six months of living in Toulouse. Not least because I can confirm that, unlike after all of those Toulousain experiences, it would have been safe to be locked in a small, windowless room with me. If you catch (or smell) my drift.

What else did we have? Maldon oysters were chilled, plump and shucked cleanly (no stray bits of shell and plenty of juice) so exactly how I like them.  Clams were cooked in a delicious garlic, butter and Manzanilla sauce. Super good.

For dessert we shared an ille flottante and agreed that it was excellent. Maybe the custard was a little sweet, but I enjoyed the faintly salty crunchy caramel sprinkled over the top and the meringue was spot on.

We drank sherry to start, a good, decent value, carafe of red (loads of choice for booze – as you’d expect for a wine bar – but maybe a bit inaccessible for the novice). And some espressos too. I think that was about it. Oh, and some sparkling and still water (both of which were on the house).

So why is it better than Terroirs? I think the food is more interesting – not massively different, but there seems to be more of interest on the menu and I would have been happy to have pretty much all of it. As I hope is obvious, I loved the setting and the atmosphere was great – bustling without being oppressively busy or loud. It feels like the kind of place you’re always going to have a good evening in. Service was excellent too – our waiters were really amenable and very patient with our slow pace of ordering, eating and leaving. There was never any pressure to move on. When we did want service they were attentive (whereas I sometimes think the waiters at Terroirs go out of their way to avoid you) and at other times we were unbothered. Importantly, our food was brought at an appropriate time throughout (cold oysters first; followed by a few smaller plates and then the heavier mongetes).

Brawn’s first month saw only amazing reviews. There’s been a slight backlash from bloggers and critics who visited on and around the same night as me (end of December). By backlash I mean they say it’s good but maybe not so amazing that you should drop everything and schleck across town (I think they’re put off a bit by Colombia Road being relatively inaccessible). I’m a bit more positive. This isn’t fine dining blow your mind stuff, but it is a great place worth making a trip to – be it for wine and nibbles, a relatively frugal light lunch or dinner, or a massive pig-out. I say buy a bike and go there.

Food was £20-£25 per head. My bank statement suggests we spent another £15 or so each on booze, coffee and service. You could be frugal and spend less. You could easily spend more. 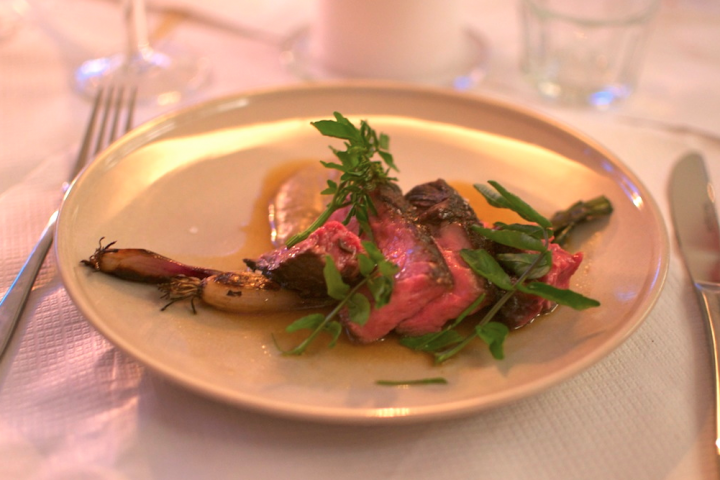 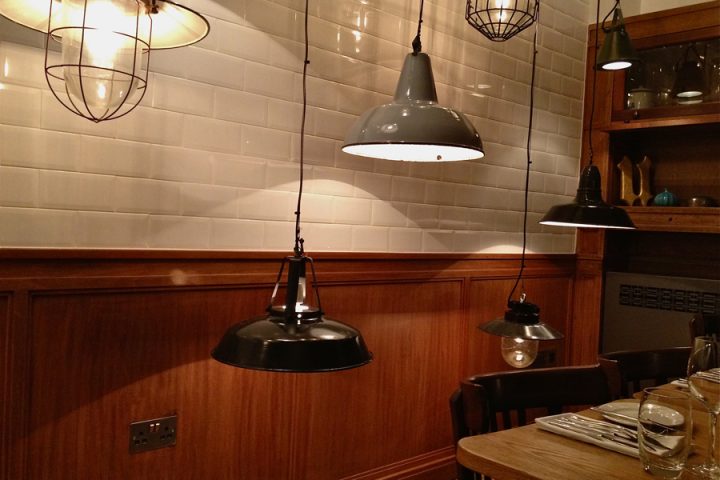