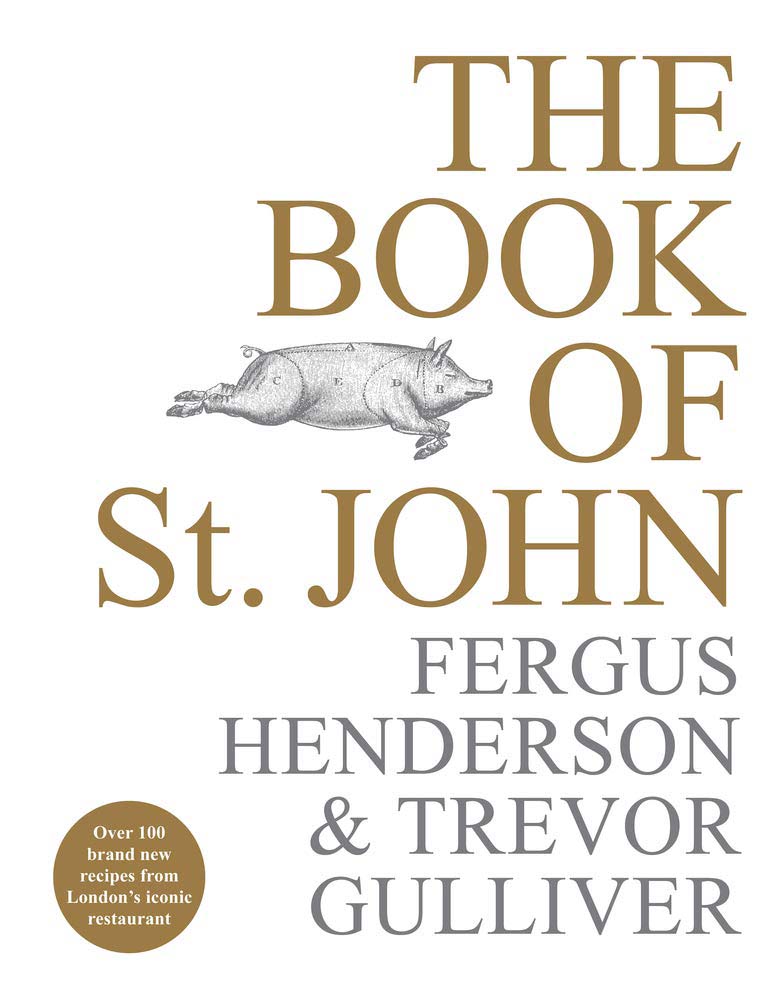 Published by
One of the cookbook highlights of 2019, The Book of St John will please a broad church.
Buy now on

The last thing you need is yet another round-up of this year’s cookbooks / gift guide. Yet I decided to write one any way. It’s really long. You’re welcome(?).

For fans of British food

Now’s not a great time to say “I’m British and proud”, is it? But I suppose if we think creatively enough there are a handful of things to be positive about … like, erm clutches straws … a fistful of really good cookbooks showcasing ‘British’ food.

The Book of St John, The Quality Chop House (QCH) and Black Axe Mangal (BAM) are three crackers. Yes, they’re all books from restaurants, which is not always something that translates well to cooking at home. However each captures the spirit of the places they’re set in and, moreover, they go the extra mile for home cooks, structuring their content in ways that’ll help the hobbyist: QCH and BAM are equal parts general method and specific recipes, and so pass on knowledge and secrets; St John explains what makes its iconic restaurants tick, working through classic yet new recipes as it does so and, particularly appealing I think, also provides a clutch of very doable feasting menus towards the end.

Which to get? It’s a difficult call and they all have their merits. You can read about how much I like the BAM book here, though it won’t be to all tastes; QCH, like the place, has understated class running through it and is something (and somewhere) you could keep returning to; but it’s hard not to push the Book of St John — a thing of beauty from an iconic brand (even though racy as gold edged pages seem anathema to the restaurant) — which I think would please any recipient (or you) who’s ever heard of the place, whether they’re a regular or have never been. It echoes and references Fergus Henderson’s first two Nose to Tail books, but just about strikes the right balance between familiar and new. And I suspect anyone who’s got the originals would feel their collection incomplete without it.

Still, too London restauranty? Try The Joyful Home Cook by Rosie Birkett, which takes the user through the British seasons in an earnest, aspirational but realistic way. It’ll take modest home cooks to the edge and beyond their repertoire, and probably surprise a few ‘experts’ too.

What is British cuisine? Tellingly these four books are all grounded in the produce of these islands, but also demonstrate and acknowledge the clear influences of other cuisines and cultures. If you’re buying for the bullish patriot, or just someone who loves their meat, two veg and also their chicken tikka masala, you should definitely consider them.

For those with itchy feet and adventurous palates

At the beginning of 2019 I heard from a number of different publishes that the trend for cookbooks focused on regional cuisines trend has had its moment. That might be true when it comes to consumer appetite. Yet it’s still been a stellar year for books about food from far (and not so far) away places (so you should still splash the cash!).

Salt & Time by Alissa Timoshkina is a serene and evocative walk through the food of a modern Russian kitchen (of far greater variety and temptation than you might think). Kay Plunkett-Hogge’s Baan: Recipes and Stories from my Thai home is a really good, detailed yet extremely accessible book on a cuisine that people either reductively limit to green curry paste, or think isn’t something that can be done in a British home because ‘the ingredients’. On a similar vibe, I thought Tu Casa Mi Casa is a fantastically clear way for home cooks to get into (and to cook) proper Mexican food. Though if you think the person you’re buying for (or, again, you) might prefer something less ‘exotic’, Alex Jackson’s Sardine is an outstanding stroll through the flavours and dishes of Provence.

Two others shine even brighter.

I bet even the most well-travelled and eaten of your friends don’t really know about Burmese food. This can now chance, thanks to Mandalay, a revelatory, educational, personal and mouthwatering walk through Burmese cuisine. MiMi Aye is both an expert, a geek (we like) and also a(n accomplished) home cook, which means the recipes we get are authentic, detailed, but also made for us to follow. There’s spice and fragrance and comfort and MSG, and ultimately a load of things you (or your pal) will want to make.

Also: Taverna, which I wrote about in more detail over here. Suffice to say that here is a book of absolutely delicious recipes, both familiar-ish but also surprising, and so, so cookable. Georgina is of the Jamie Oliver stable, so knows how to write recipes that people are going to use frequently and successfully; it’ll make you want to book a holiday, while also providing a multitude of delicious things to eat right now.

There were two standout cookbooks in the “not fussy but great food to feed friends and family” category this year.

Diana Henry’s back catalogue is seriously impressive. In recent years alone, A Bird in the Hand, Simple and How to Eat a Peach have proved essential. You would think the cup might run dry. But, remarkably, she’s followed those with yet another gem packed full of savvy and eclectic hits. Cook for others without effort but with great success — From the Oven to the Table; simple dishes that look after themselves does exactly what it says on the tin.

Another option is Nothing Fancy by Alison Roman. The American recipe writer’s second book has — rightly — made a splash, thanks to the sassy, persuasive words of the author, a cult social media following, and ultimately her easy to realise ideas and flavour combinations. It feels like Roman asks two questions when she sets out to write a recipe: is this going to be exciting and memorable to eat; and is every step merited and faff-free. The photography and font choice can at times seem a little in your face and, well, American. But get over that and you’ll find a first class set of recipes that could well form the backbone of your eating in for years to come. Further gushing praise can be found here. (BTW while this is a gift guide not a ‘best of’, it’s a three way tie between this, Taverna and BAM for my favourite of the year).

For those who are quite, err, particular

Generalist and eclectic isn’t for everyone. For that diligent, focused, (OCD?) person in your life, try a single subject cookbook.

Both Sour: the magical element that transforms your cooking, by Mark Diacono and The Vinegar Cupboard by Angela Clutton deep dive into things that make us purse our lips: Diacono through all things that relate to that taste (you quickly realise quite how misleading the phrase “a sour taste in the mouth” is); and Clutton by writing the vinegar reference bible with recipes that you never knew you needed but do.

If sweet and bitter is more their/your thing, check out Cocoa: an exploration of chocolate, with recipes by Sue Quinn. As with the other two, when you look in great detail at a single subject, you realise quite how wide ranging that subject actually is.

Super words and recipes throughout all of three of these.

For anyone upping their veg intake

Yes it’s been a good PR year for vegetables. But the plant-based theme’s only going to get bigger and more mainstream, so settle in and enjoy your greens.

Whether you’re buying for the convert, or to preach to them, my picks of this year’s crop are Elly Curshen’s Green — a book more thoughtful and practical than most in that it sets up batch cooks and base elements of our lunch and evening meals, that you can then supplement and pimp via the other ideas that are there; and Nigel Slater’s two parter, Green Feast, both Spring/Summer and Autumn/Winter host a plethora of simple and always pleasing recipes are either vegetarian or vegetable focused, and all typically Nigel. For light and fresh, go for the pink one, for a cuddle in a bowl, the orange.

Perhaps the most creative of all is East by Meera Sodha. Fans of her vegan column in the Guardian’s Feast supplement will know what to expect — a clever and vibrant tapestry of dishes which transport you to the places that inspired them, though are also totally achievable back at a busy household in Blighty. Indian dishes are mighty (there’s a tomato curry that might even have the edge on Simon Hopkinson’s, which is the highest praise I can give), but also genius South-East Asian derived recipes too, including mushroom mapo tofu and a squash with black bean chilli oil side, both of which have become regulars in my repertoire. The recipes work, the influences are varied, and you / they really won’t miss meat. What more is required?

For people more likely to read about food than cook it

A Half Baked Idea chronicles the journey of a barrister career-changing into food … but it’s also about the nature of grief, dealing with grief, changing vocation, and all aspects of love. Very engaging, and funny, too.

Also on grief, but also only depressing in that the quality of the young author’s prose is so enviable, Ella Risbridger’s Midnight Chicken chronicles a tragic journey and the redemptive power of cooking. The recipes are nice (terrible word, meant appreciatively), but for me it’s the reflective and absorbing personal essays (and indeed introductions to the recipes) that grab most tightly. Jaw to the floor tragedy, honesty, love and hope.

Does the person you’re buying for like cycling? And travel memoir? And croissants? They’ll like One More Croissant for the Road by Felicity Cloake.

If they’re not fussed about new things

I literally can’t believe you made it all the way to the bottom of this post. Slow day?

Well, I’ll use the opportunity to say that much as I lap the new up, cookbook publishing is a horrifically saturated market. And just because a book isn’t on one of these lists, isn’t piled on the Waterstones central table (or even on the shelves at all), or wasn’t published in 2019, doesn’t mean it’s not worth having (or better than others in the limelight). Moreover, cookbooks are for life, not just for Christmas …

Consider something like Alice Hart, The New Vegetarian. It’s only a couple of years old, but that’ll put if beyond the thoughts of many booksellers (and buyers). Evidently, the content’s still very much on point, and in any event it’s a collection of recipes that’ll stand the test of time.