First, Catch: Study of a Spring meal
Thom Eagle
Published by Quadrille
Not a cookbook, as such, but a book that will make you think more about what and how you cook. Earnest, enjoyable, and easy read.
Buy now on

Another year of not posting nearly as many new cookbooks to the Cookshelf as intended. Sorry.

This selection of potential Christmas gifts is partly intended to address that failure, though it’s also supposed to be a helpful pointer for those of you who like giving or indeed asking for food-themed books.

For transparency, I’ve put an asterix next to books that I was sent by the publishers/authors. The others I’ve purchased (don’t tell my wife). I’ve received many more books than listed here, which perhaps provides some comfort regarding curation of the list. And I’ve cover-to-cover read and cooked from everything I’ve recommended. Not sure that’s the case in all of the ‘best of 2018’ and gift lists you’ll see.

One of my absolute favourites this year — if purely for the number of saliva inducing and highly cookable recipes encased within — is *Gizzi Erskine’s Slow: food worth taking time over. The food here, as the title suggests, is the opposite of the recent 15 minutes and only 2.5 ingredients required genre. A clutch of them are project meals that’ll be new to a some — fancy making your own hand pulled noodles, or curing and smoke brisket? More of them are simply things that require a bit of time in the over or puttering away on a hob before they’re done. And SO many of them suck you (well, me) in: flageolet bean, confit garlic and anchovy gratin and lemon surprise tart in particular.

*Honey & Co: at Home — Middle Eastern recipes from our kitchen is also one for people who enjoy cooking for and eating with others. A mix of their FT Weekend Magazine recipes and dishes not seen before, it’s it for the sea bass-stuffed filo pie alone — though the chatter, pace and photography will keep you engaged beyond that. Covers all bases: for two; for friends; for a crowd; snacking; breakfasting; main meals; vegetarian meals; cakes, desserts, treats and more. I think it’s got legs and would be used but feel fresh for years.

Gill Meller’s award-winning book Gather was lush, but perhaps in parts a little difficult for home cooks without easy access to squirrel and foraged weeds. This year’s offer, Time: a year and a day in the kitchen is luscious as well, and similarly full of intriguing combinations. But it’s also more usable. Gill takes us through the year with seasonally themed recipes to suit morning, day and night. I reckon you should head first to poached fish with seaweed, ginger and spring onion, kohlrabi and dressed sprouted puy lentils, dal with crispy kale, quince and vanilla creme brulée. But there’s plenty more to sink into. This is a cookbook for people who already like cooking, and who want their comfort zone stretched in an imaginative yet still, well, comfortable way.

Diana Henry’s *How to Eat a Peach is the only book I managed to find time to write about. To be fair, I made the time to do that because it’s a gem. Read more here. In short, I think it’s her best cookbook to date.

For those with taste buds that travel

What a book Caroline Eden’s Black Sea: Dispatches and Recipes — through darkness and light is; an absolutely fascinating, compelling read, that sucks you into the author’s circumnavigation of the countries that touch the Black Sea: Ukraine, Romania, Bulgaria, Turkey, Georgia and Russia. This is engrossing travel writing that tells the story of cultures through their cuisine, and sprinkled with recipes for good measure. I do think that for some those recipes will be cooked, but most of us will probably just be prompted to book a flight.

As the subtitle suggests, *Asma’s Indian Kitchen: Home-cooked food brought to you by Darjeeling Express could fit under ‘homely cooking’ above or indeed the ‘cheffy’ subsection below. But I place it here because Asma’s food is spiced in a way that makes my tastebuds feel like they’ve been teleported to India. She’s also one of the most generous people you’ll meet, so it’s no surprise that her first cookbook is all about feasting; whether there are only two of you or more. Start with the masoor dal, then move onto the chicken chaap and you’ll be hooked. I’ll admit to sometimes feeling overwhelmed by the options when reading cookbooks focusing on Indian cuisine, so the ‘menu suggestions’ at the back are especially appreciated.

*Zaitoun by Yasmin Khan tackles the complicated story of Palestine with sensitivity and skill. This former human rights worker guides us through Israel, the West Bank and Gaza with personal tales and intelligent commentary, plus approachable, easily replicable family recipes that the home cook will want to taste for themselves.

If pushed for just one, my book of the year would be *First, Catch: Study of a Spring Meal by Thom Eagle. Not least because it’s the one that I wish I’d had the creativity, skill and patience to write myself. This is not a cookbook — just prose — but is a gentle, thoughtful stroll through a seasonal menu that will make most readers think differently about what and how they cook, and indeed what and how they think about cooking. There are countless pearls of wisdom in Thom’s words, and while there are no traditional recipes (“I have nothing against recipes … yet”), there’s plenty of cooking to be done once finished. This is a window into the mind of an inquisitive chef as he structures his meandering thoughts on cooking processes and menu writing. One to read and return to.

Don’t let Max Halley’ lovably bonkers front fool you. I think he’s one of the clearest thinkers in London’s hospitality industry, able to ignore faddish hype, trends and general bullshit that sucks in so many. Indeed, he’s zoned in with a lazor-like focus on serving the best things between two pieces of [hand-]sliced) bread, and through Max’s Sandwich Book, he’s spreading the mantra of his brilliant and similarly eponymously titled sandwich shop — specifically that the secret of delicious is that the tastiest dishes, and the most successful sandwiches, are so because of six things “hot cold sweet sour crunchy soft”. We are granted the secrets of his house staples, plus a few extra classics and guest sandwiches to try out — make room in your Christmas project cooking schedule for the ham, egg and chips, the bhaji smuggler, and the Korean gangster. Two pages are devoted to the tuna melt, but all that is written is “I’m sorry but I don’t eat much cheese and I can’t have a fish and cheese recipe in my book. Keep making it just as you already do”. Irreverent yet also, secretly, deadly serious.

I’ve only just purchased The Noma Guide to Fermentation (foundations of flavour), so the bit at the top at having cooked from all my recommendations is a mistruth. But on first read this is a very clear and surprisingly practical and usable fermentation bible; and all you need for lacto-fermentation, kobucha, vinegar, koji, misos, garum, shoyu  Come back in about three years when my koji is ready and I’ll let you know what I really think.

For those who enjoy sweet things and brain freeze

The proof is in the pudding … and Kitty Travers’ ices are always absolutely banging. It follows that her book, La Grotta Ices is an ice cream, sorbet and granita textbook to return to every year. Follow her mantra of using fruits at their seasonal peak and set yourself for a lifetime of classy, refreshing ices. As an aside, in addition to the repeatedly inspired flavour combinations, I also really enjoyed reading about her background and philosophy.

It’s all very well Googling ‘hot cross buns’, ‘treacle tart’, ‘Yorkshire puddings’, ‘marmalade’, ‘fish pie’, ‘pesto’ or whatever classic you need to whip up. But you may as well cut out the middle man and go straight to a compendium of the top (or most reliable) search result you would have landed on anyway, and put Felicity Cloake’s Completely Perfect; Essential Recipes for Every Cook in your and indeed everyone else’s stocking. A mega resource. We should all have a copy.

For kitchen and coffee table

I was shameless enough to promote my own book in last year’s list, and I’m doing the same twelve months later. This time it’s a touch more excusable because 2018’s offering is Borough Market’s, not mine (I just wrote most of it); should there every be any author profits, the cash goes back to the charitable trust that runs the Market and helps to support fledgling food businesses, plus the many community events that take place through the year. With that pre-emptive pass-agg defence in mind, do consider grabbing a copy or two of The Borough Market Cookbook: recipes and stories from a year at the market. It’s a celebration of seasonal market shopping and cooking, with 120 recipes showing how easy it is to make the most of ingredients at produce markets wherever you live. It’s also a celebration of the place: of the many ace producers and traders, the history, the setting, and the aforementioned community events. Like the Market, it’s bustling, colourful and convivial … g’wan.

If that’s not enough to get on with, also consider

*Larder: From pantry to plate – delicious recipes for your table — Robin Gill 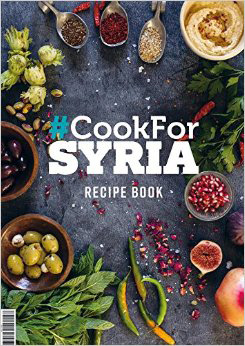