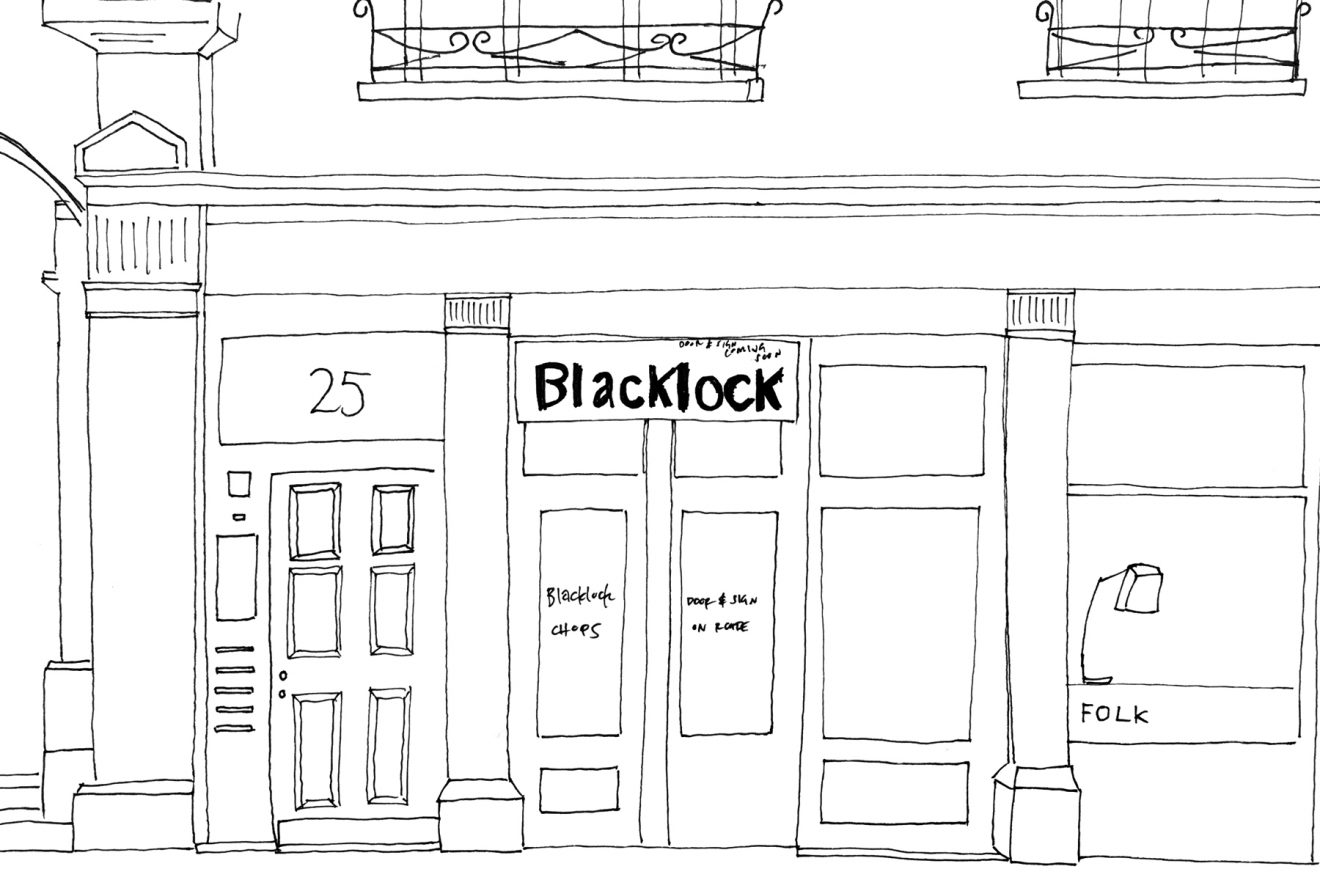 It seems the low to middle-end concept restaurant has gone full circle. Which, if you think about it, makes complete sense.

For it’s all very well popularising the previously unloved fatty muscles and connective tissues, cooking low and slow, and sticking those things on a bun with some slaw. But at some point the poor butchers are going to say: “will someone please buy the f*****g lean bits. You fellas do know how to cook something for less than 8 hours, right? Chuffing chefs.” Or words to that effect.

Blacklock, a basement restaurant on Great Windmill Street, is clever. Real clever. It’s taken the restricted menu, low price, big volume idea, and has thrown chops at it. Sure, you can have a few snacks (‘pre chop bites’) for three quid to start, something from the short selection of cocktails for a fiver, and a dollop of  ‘cheesecake’ for four more pounds at the end. But, really, it’s all about chowing down on a large plate of protein somewhere in the middle of all that. Theoretically you can choose the number (and meat type) of chops you want, paying £4 for each. But why would you, when you can go ‘all in’ for £20 per person (including bits and a side)?

The snacks took no time to arrive. These are indeed little bites: rye crisp breads (Peter’s Yard?) topped with a blob of something tasty, and a little bit of flair. So ‘dirty ham’ was basically rendered pork fat topped with a curl of unremarkable air-dried ham. Egg and anchovy was a sun yellow eggy emulsion topped with anchovy and soused shallot, and was much more successful than the pork.

Negronis were our choice of cocktail but I’ll come back to them at the end – because the food came thick and fast.

Some sides were laid down: a glorious half a coal baked sweet potato – black on the outside, and sweet, soft, buttered and well seasoned flesh within; a (deliberately) burnt baby gem lettuce; and a shaved salad of fennel, carrot and funky radish with a zingy dressing.

And then a mound of meat.

It’s quick to come because the meat is quality and relatively thin. It’s blasted on what I imagine to be a heaven sent (/Mark Parr of London Log Company) grill, pressed down with a vintage cast iron to speed the cooking, and then flung out the door before much of the meat fibres have even considered saying ‘denature’ (because that’s what they shout when they turn grey).

This plate of meat is really very good. Super good is the technical term. We got a wonderfully sweet pork chop, cut from the loin (as is traditional), caramelised and browned on the outside, pink in the middle. There was also a long slice of pig belly – which served as a timely reminder that sometimes it can be just as good to chew this cut, as it is to suck it through your teeth. And how good is it to taste the flavour of the meat, not just a sugar laced, smoke blasted reduction of a sauce?!

After that, a couple of lamb ‘t-bone chops’ each. Dark red near raw inside both the loin and fillet side. Plump, meaty, tender, lacquered and burnished by flame and well seasoned. There was another type of lamb, apparently a neck chop, which I think had been bashed thin – so cooked to medium this time, and delicious for that. Lovely stuff, well seasoned, and for what felt like cracking value.

There was no beef in our selection. The menu said cow was ‘back next week’. I’m not sure what the offer will be – short ribs, perhaps, to fit with the price point? (though they’re also about to bring on premium ‘chops’ too – you can take the boy out of Hawksmoor, but you can’t take the steak of the boy.)

On enquiring about the beef, we were told “the beef takes a bit longer to age”. Which is long form for “we’ve sold out.” No shame in that. In fact, the day this restaurant (with its tight menu, seemingly bargainous pricing, loads of bums on seats model) starts having exactly the same cut of each type of meat on the all in plate all the time, is the day they can no longer claim they get all their meat from Cornwall’s premium butcher, Warren’s. Blacklock is all about that plate of meat. If it stops being damn tasty, there’s very little more to it. I don’t imagine they intend that to happen any time soon.

Being picky (because, why not?) I’d much prefer the meat to come in two stages. Short of Man vs Fooding it, no one will get to their last two or three chops and find they’re still warm. Blacklock just about gets away with it because the vibe is fun and seems generous (and, again, the quality of the meat and char), but the experience would be better if, when eating, half the meat was above tartare temperature.

All that tasty meat (and those sides) for £20. Cocktails for a fiver? Seems too good to be true.

Of course it is. I’d rather spend £10 (well, £11.25 after service) on one quality negroni at nearby Quo Vadis or Spuntino than two diluted and generally sub-par ones over here. Moreover, on my next visit, my £4 dessert money is going on an ice cream at nearby Gelupo. I get why things are as they are, though, and still give Blacklock a knowing thumbs up – for a clever, entertaining and vibrant concept, well executed.

Ah, you see it’s not just £20 all in. Of course you’ll need a couple of drinks each, maybe share dessert, add service, split the bill and then walk out for £38 per head.