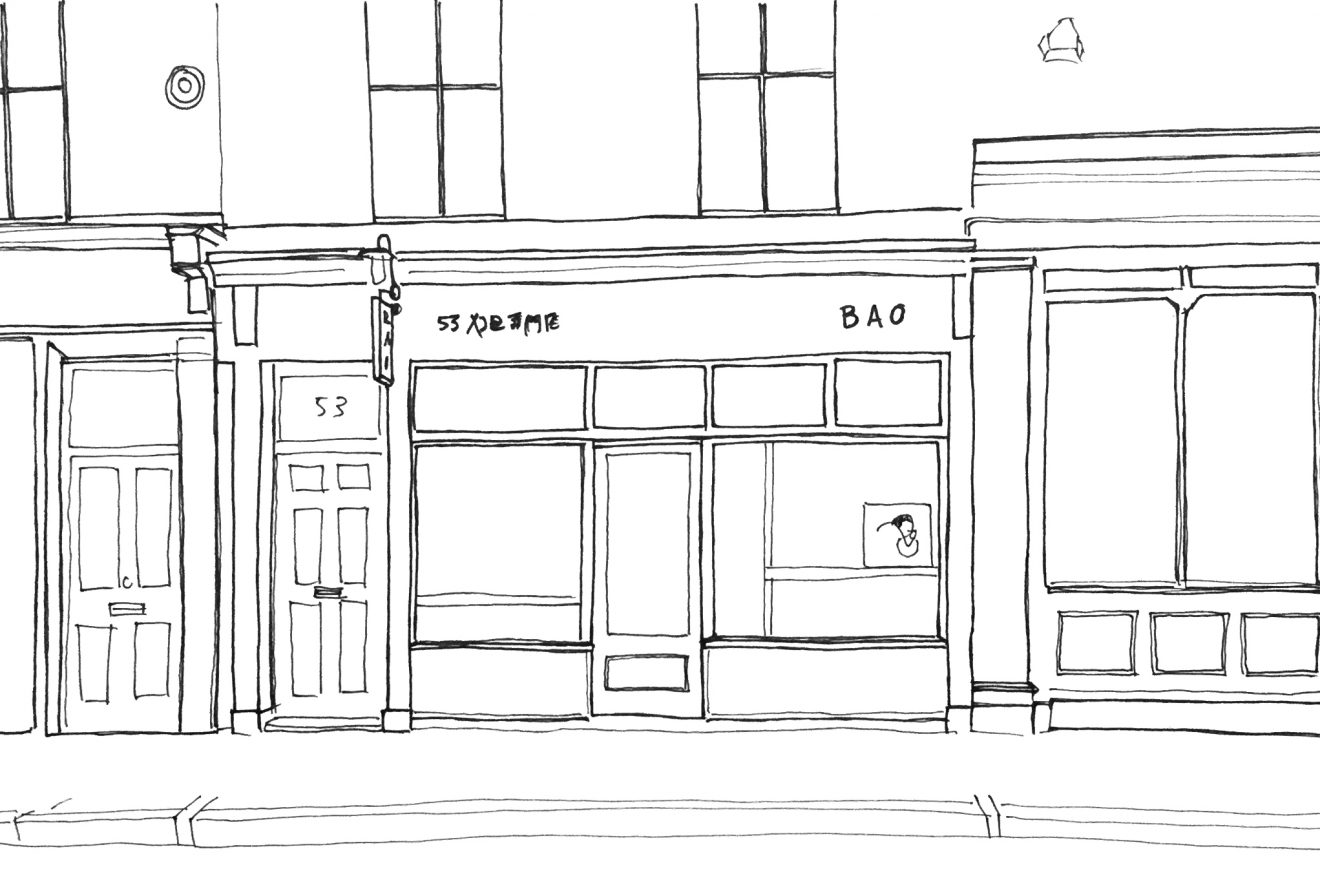 “So a bao’s basically just a slider” declared the girl a few seats down, as she inspected the plate in front of her.

To pigeonhole a bao, that bao, any bao into 2010’s favourite fad-menu-cop-out-item does everyone a disservice. A bao can be many things. Let me explain.

A bao can be any number of different steamed buns in Chinese cuisine, not least a round and fluffy cha siu bao filled with sweet barbecued pork, or an intricately pleated, soup filled xiao long bao.

The bao in front of you is a gua bao. Which means it’s a yeast fuelled steamed bun of the type originating from Taiwan, most likely stuffed with a big hunk of pork belly (a la David Chang’s Momufuku and our own Yum Bun). It’s basically a pillow. That you can eat.

In fact, hang tight, that particular bao is ‘The Classic’, right? Which actually means that, thanks to where you’re sitting, it’s stacked with ridiculously tasty braised pork, fermented greens, a salty sweet sprinkle of peanut powder, and a touch of coriander for the finish. You’re about to have a mouthgasm. Like, OMG totes amaze.

Because this place, Bao, on Lexington Street, is the most important move from temporary street food trading to bricks and mortar since Pitt Cue Co. It’s original, inventive, stylish, clever, and already too small for the Soho site that the founders and their investors settled on.

These guys (well, two girls and a guy), Bao, started trading at KERB just two years ago, yet it feels like their restaurant has been an age coming. Anyone who has queued for a little too long to eat their Classic bao, daikon bao, or fantastic fried chicken, would’ve sensed that a proper place was basically a formality.

That a grown up shop seemed inevitable, however, in no way guaranteed it would be quite this good.

I didn’t expect, for example, that there’d be supremely cooked, sweet scallops in a yellow bean garlic sauce (whatever that is, it’s slurpable and teeth tingling). Neither did I expect slices of perfectly crusted on the outside, pink through the flesh, 40 day aged beef rump cap in a white soy sauce. Nor a sweet, sour and hot aubergine salad, which was at once irresistibly fresh and aggressively punchy. And I didn’t expect a bowl of glutinous rice, topped with shredded guinea fowl, an egg yolk and unidentified sweet and crunchy bits. Not least because I hadn’t ordered it – rather, a friendly stranger across the bar passed that bowl on to this grateful fatty because he’d tried and reluctantly failed to eat his way through the menu.

I’d had an inkling there’d be a bloodcake. But not that it’d be crunchy and crisp on the outside, soft and yielding and glutinous (from the rice) and sweet (the caramelised onions) within. Nor that it’d be topped with a glossy, part cured egg yolk, just to ram home the point that this cuisine is a fun mix of exotic, creative, ambitious yet comforting. I would’ve loved more of a ferrous aftertaste from the blood, but I have a feeling it’s the texture of the blackened rice that’s the thing in Taiwan.

The confit pork bao? Yeah, well they kind of had to do a pork belly slab option. I wish I’d tried it, but I’ll give that a go next time. Fried chicken bao? Sure. It’ll be a cracker. Because their chicken and spicy sauce is the nuts. I’m pretty sure the braised lamb shoulder with green chilli bits bao was once on their Netil Market shed menu. So that was a hint. I enjoyed it this time, parked as I was on a stool in the minimalist little Lexington Street room, but secretly wished I’d stayed safe and gone for The Classic. And the deep fried bao with Horlicks ice cream in the centre? Well, that was predictable. Partly because there’s a place that does one in Hong Kong called Little Bao. But mostly because doughnut plus malt ice cream works so very, very well. (Incidentally, HK’s hottest bao bar is inferior to our Bao in every respect).

The food came faster than expected. The service was busy and attentive (energised by the electric charge of an opening week). Drinks feel authentically Taiwanese, not that I’ve got a clue what authentic would be, and the menu is longer than I imagined it could possibly be, whilst still being short enough to maintain interest. Best of all, it’s all really, really fairly priced. £3 to max £6 for anything on the menu means at most £20 per person for food (before drinks and service).

Do go. This paean is justified. You will queue (it’s your Bao destiny), but maybe try and avoid the busiest moments of lunch and dinner (12:30-14:00; 19:00-21:00). I also suggest starting your order with a big tick next to The Classic bao to ensure you don’t feel slighted. You know, that bao. The one that’s basically just a slider.

If you’re seeking pictures, take a look at Instagram. Bao will be all over it like a rash for some time. Start with Clerkenwell Boy, The Skinny Bib, Engin Ozger, and maybe me.

£15-£30 per person, depending how hungry and thirsty you are.