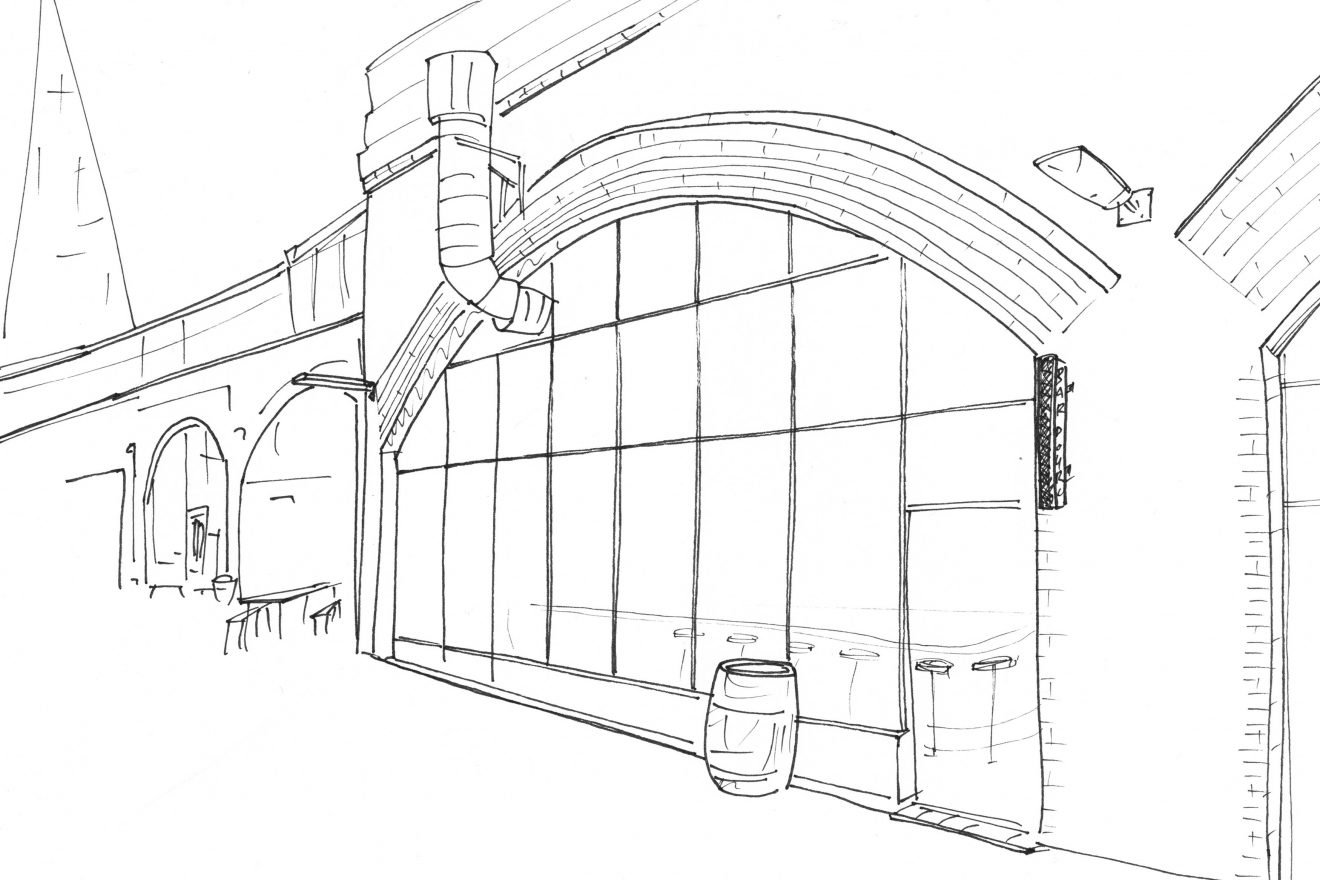 It seems so obvious now. But it wasn’t ever thus. In fact, the whole “ahh, of course they’ve opened it in a railway arch” thing is actually quite a recent groan: there’s only really been four or five years of people raising eyebrows, pointing out the exposed brickwork and rumbling train tracks, whilst hissing “hipster” yet simultaneously wishing they’d had the vision to open something similar.

What came first? E5’s Bakehouse and it’s mildly chaotic cafe, maybe? A quick wordsearch of the blog (you see, it is useful for something) shows 40 Maltby Street was autumn 2011, Burnt Endz summer 2012, Bar Tozino by 2013 and Tonkotsu East and Sager & Wilde (then Mission) in 2014. There’s Berber & Q, Arabica, Paradise Garage, Beagle, El Pastor and plenty more … all engaging places to eat and drink.

Perhaps the rent is (was?) relatively cheap, so these sites often have the air of a shoestring set-up, plus the kind of innovative food and personable hospitality that’s mostly only present in independent and desperate to do your own thing restaurants. But there is also something inherently buzzy about a damp, noisy arch, which to my mind at least makes them a pleasing place to eat. Do the reverberations provide a sensory enjoyment that elevates the eating experience?

There are more arches to be filled, of course. Yet it now feels like either Network Rail have wised up to the potential income, or operators with deeper pockets are involved. Or both. So the spaces that might once have been taken by one man and his dog breweries, ham vendors and bolting chefs starlets, are now eyed up (and won) by ventures with even grander plans and the cash or leverage to actually, maybe, possibly, hint at achieving those dreams. Save for offshoots of Ducksoup and Peckham’s General Store, arches at the forthcoming Battersea Power Station development feel like a bland box ticking exercise. Word is that Soho House may be one of the operators moving into Camberwell’s refurbished arches, so adding to their Vauxhall sub-track Dirty Burger. The evolution from quirky space, to corporate sheen is fine and inevitable. But it does feel like we’re at the end of a this particular genre of endearing and creative openings.

What prompted this ramble? I suppose the train of thought was set off during a couple of recent meals under the tracks leading out of London Bridge; in places that mixed more than decent food with a certain locomotive resonance. In such environs I often sit and wonder about seeking a similar site to open an offal bar or shrine to all things fermented, before squashing the thought with some lawyerly risk-averse reasoning (usually “seems like too much hard work”; or in this case, the “nah, rent”).

So instead of scheming, I’ll just briefly recommend those places. And I guess while I’m at it, mention that you should make the most of the others mentioned above too — before they turn into generic pizza and burger sites. (For what it’s worth, 40 Maltby Street is the absolute best of the lot).

Bar Douro is the jewel of the Flat Iron Square gastro development, which sits under the tracks heading west, midway between Borough High Street and Southwark. Its blue and white tiled interior, grey marbled counter tops, wine rack vaults and exposed filament lamps are stylish and smart, beguiling and ultimately redolent of Lisbon — 2016’s standout city break. Add all that to a high parabolic ceiling and the aforementioned rumbles, and you’re on to a pretty good start, regardless of the F&B offer.

But that’s pretty decent too, I reckon.

As mentioned by Marina, Portugal’s cuisine is massively underrated. At Bar Douro we’re treated to molten salt cod fritters and hake goujons, plump crimson prawns laced with garlic, finger licking and fiery piri piri chicken wings and an A1 octopus tentacle, which was firm yet tender, crisp edged but not dry, and matched nicely to vivid sweet potato purée and crisps made from the same tuber. Alantejan pork with clams wasn’t a patch on the Alantejan pork and clams I had in, uhm, Alantejo — marginally overdone and without the fat content and flavour I’d previously experienced — and a nicely-cooked, meaty skate wing was rather drowned by seaweed butter. But at worst they were inoffensive small plates, and by no means ruinous of a decent meal.

My first trip involved an outrageously generous deal — a fantastic fatty pork roll with gum recedingly punchy Serra cheese, those salt cod fritters and a pastel de nata for £11. I’m not sure the lunch package is running anymore, though each of those things are still on offer and don’t add up to much more on the normal a la carte pricing.

If you’re after the best of Portugal in London, then Taberna do Mercado is the place. And Bar Douro pales in comparison to the Iberian counter dining of Barrafina and José. But the cooking and wines are perfectly enjoyable and reasonably priced, and there’s an undeniably pleasing vibe to the room. So it’s worth stopping if you’re in Waterloo, Southwark or Borough and looking for somewhere low-key but satisfying.

The £11 for 3 courses lunch deal is bargainous (obviously), even if you add a drink and coffee.

A la carte is more likely £30 per head plus drinks, which I think still represents good value.

I wasn’t particularly enamoured with St John’s Maltby Street site when it first opened. To be honest, it felt like an opportune but half hearted addition to the empire; something that had been tagged neatly onto the end of the iconic restaurant group’s Bermondsey bakery premises, in the hope that it could capture the Saturday ropewalk crowds, and perhaps some 40 Maltby Street and Bar Tozino overspill on other nights.

One can appreciate their rationale for opening it, but my experience across a couple of visits suggested a dilution of the brand. The wood panelled room was a good one to sit in — again, that railway arch thing, plus the usual St John austere back decor, tersely written blackboards, and open kitchen shtick — but the classics from HQ’s bar and St John Bread and Wine were always a bit lacklustre in delivery and mean in portion.

A month or so ago, though, I enjoyed the best devilled kidneys on toast I’ve ever had. Like, ever. Quivering, wibbling, plump crescents, tingling with cayenne and Worcestershire sauce and fresh as can be (with not a hint of piss).

There was a plate of sweet onions, piquant lentils and and tart curd, purple sprouting doused in vinaigrette, a stonkingly good pigeon and beetroot number (cooked just so and impeccably seasoned), Eccles cake and Lancashire cheese to finish (obviously) and Breton cider to quench the thirst.

It was a reassuring and reaffirming meal — all is well when the cogs of St John are well oiled, as indeed it seems Maltby Street’s are at present following the hire of Alex Szrok as head chef (previously of Hill & Szrok Broadway Market and Old Street). Expect classic Fergus dishes, and honest, simple but mightily satisfying cooking. A quick glance at the current menu and dishes like Pig’s Liver, Beetroot and Horseradish, and Suckling Lamb, Chicory and Green Sauce immediately jump out. Time for another visit already. When’s the next train?

You could just stop by with a tenner to cover Welsh rarebit and a cider, or an Eccles Cake and cheese. But you’re more likely to rack up £35-50 per head.

* The map locates Bar Douro. St John Maltby St is a mile to the east on the other side of London Bridge. 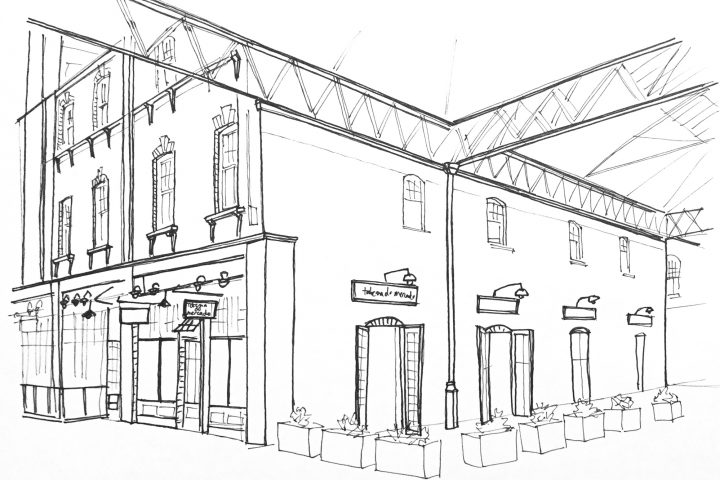 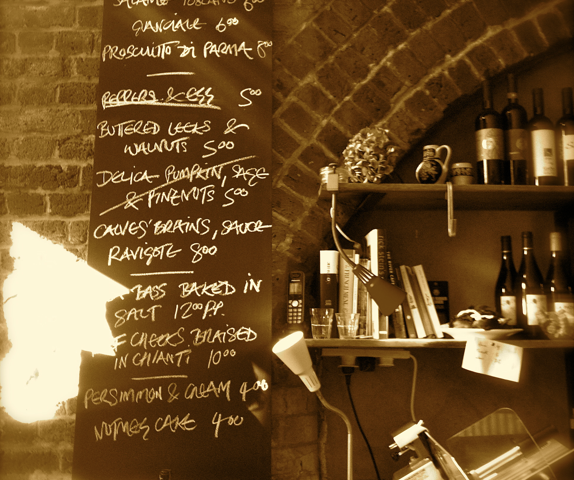