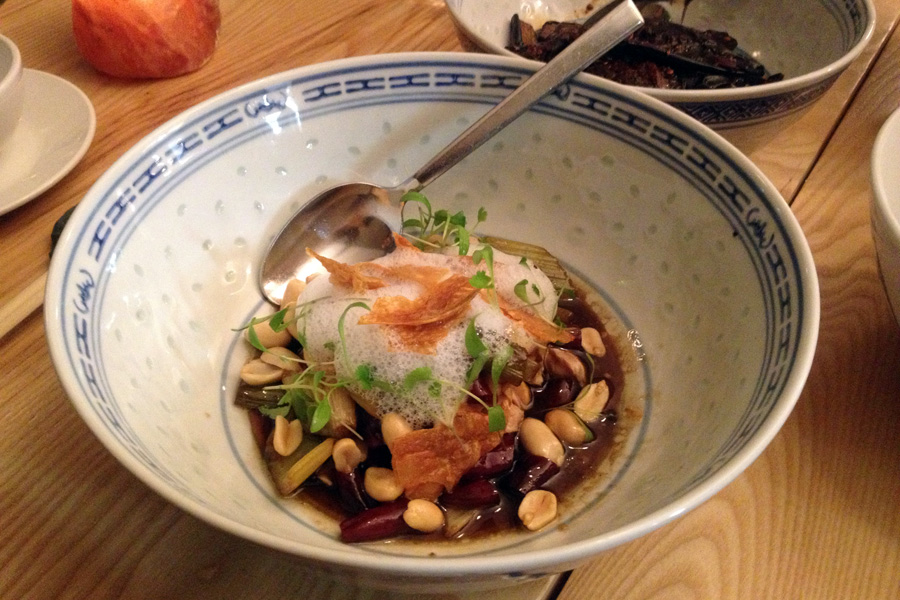 You’ll know of, or may have already been, to A Wong – the shiniest of only 2 gems in the otherwise stagnant restaurant quagmire that is Victoria. So I’ll keep the intro brief and avoid repeating standard white boy comments about eating Chinese food in the UK. I note only a few details in order to set the scene.

A Wong (the restaurant) sits on Wilton Road opposite the best Sainsbury’s in London. It’s got the stiffest/stickiest front door in the world and the loos are a bit manky, but otherwise the décor’s perfectly decent. The tables are sized to hold plenty of dishes, the kitchen pass is open and absorbing, and the wait staff are friendly, competent and engaged in what they’re serving. Which, by the way, is pretty much dim sum only at lunch, with bigger hot dishes at night.

A Wong (the chef patron) was trained in the French classics a few hundred metres away at Westminster Kingsway college, but more recently spent a couple of years travelling around China, before taking over the family restaurant, modernising things and generally causing a stir.

Those travels are apparently reflected in the ten course ‘taste of China’ option. We went all over the place – Shanghai, Yunnan, Sichuan, Beijing, Xinjiang and more. Quite a journey for £45.

There were a number of highlights. Thin shards of razor clams, sea cucumber and pickled cucumber went down like a shot. Literally. Sucked off a half shell and eaten in one so as to get the full hit of the sweet and sharp flavour combo. Yunnan seared beef had a ménage a tois thing going on between the cuisines of Vietnam, the Mediterranean and China. Loads of fresh mint and lemongrass, stewed tomatoes in the sauce, sticky chilli and umami notes. There was truffle sandwiched between crispy tofu ‘crisps’ on the side. Boom.

Xiao long bao (Shanghai), prawn dumplings with a citrus foam and pork (and crab?) siu mai (Hong Kong) combined to make up two dim sum courses. Each was awesome. But more on the dim sum in a bit.

The star course, however, came by way of Sichuan. The poshest ‘Gong Bao’ chicken you ever did see (and one of the best too) was studded with peanuts and just enough dried chilli, along with a tickle of lip tingling Sichaun pepper. This was, however, outgunned by the most fantastic bowl of aubergines. Which were more lip numbing than the chicken, as well as squidgy, caramel sweet and smoky. I would eat these for breakfast, lunch, dinner and #fridgebuffet if I could.

I was going to write “hold your horses, though. A few of the other courses weren’t so hot.” But looking back at the menu, I was only disappointed by the ’63° tea poached egg’ that, frankly, could’ve just been a ‘7.5 minute boiled in hot water’ one. Oooh, and I’ve just remembered the excellent fermented tofu bean and shrimp butter vegetables, which was a real grower and intriguing too – butter with chinese greens … who’d have thought?

But this recount does need a ‘but’. We definitely didn’t walk out foaming at the mouth with excitement; the impact and pleasure of the meal having been dampened by it taking the best part of 3.5 hours from first sitting down to signing the bill.

Ten courses sounds like a lot, but they’re mostly morsels or small dishes to share. That Gong bao / aubergine course was super, but was also welcome simply for the fact that here, finally, was a bit of substance (and a bowl of rice). By this time we were a couple of hours into intermittent nibbling. Doesn’t matter how good the food is, that’s a bit of a bore.

Like a moth to a flame, though, I was back just a few days later; this time for a quick round of lunchtime dim sum.

Not only was it speedy, it was knockout good. Right up with the best dim sum in London, if not leading the pack. The choice for dim sum in our city is usually between restaurants punting cheap and cheerful classics; posh, thinly sheathed but slightly underwhelming; and over priced morsels dressed with plain stupid ‘innovation’. A Wong seems to be a mix all three, minus the ‘posh’, ‘underwhelming’, ‘expensive’, and ‘plain stupid’ elements.

Each piece we tried was novel and a triumph. Scallop in a crispy pointed ‘puff’ with XO sauce and tapioca powder; the same, flawless XLB from a few nights before, and a mushroom, pork and truffle Yunnanese version of a soupy dumpling too. That citrus foam on the prawn dumpling is one of the few foams I’ve had in recent years that adds to a dish – a burst of light seasoning shrouding the main event. Pork wonton in a cup of chilli and garlic, with crispy bean curd skin sitting on top was probably my favourite; though the prawn stuffed deep fried chicken wing ‘special’ was really pretty special too.

For these successful riffs on dim sum classics, you pay £1.30-£2.00 a piece. Good value for the skill, and the unusual benefit of being able to order exactly the quantity you want, rather than be restricted to baskets of 3 or 4.

A Wong is very definitely worth a vist – at any time of day. I don’t know whether it’s modern Chinese or just something bastardised for the British palette. But I know it’s generally very enjoyable. The timing during my evening visit was definitely out and that was a real shame. It could well have been an unusual blip, but in any event, I’m tempted to say go off the a la carte instead and plump for a selection of hot dishes in one hit. Just make sure that includes the Sichuan aubergine.

A Wong in 3 words

The ten course taster is £45 per person. Think you’d spend a touch less for a feast from the a la carte. £18-23 should sort you out for dim sum.